Rao met Kerala chief minister Pinarayi Vijayan in Trivandrum on Monday and discussed the Federal Front and sought the support of left parties. 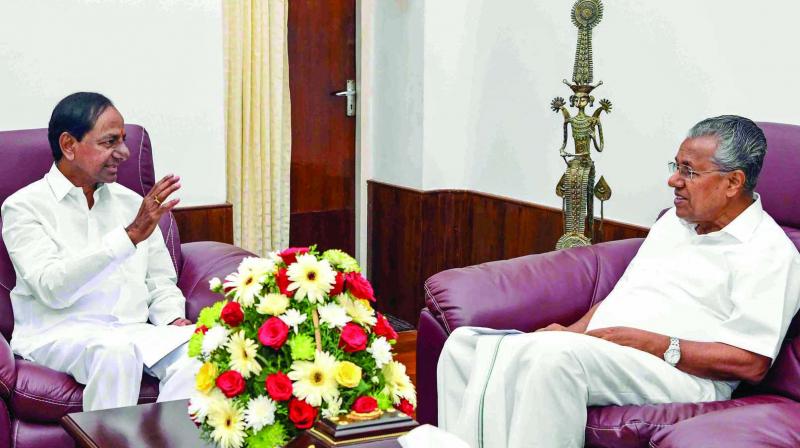 Hyderabad: With the 2019 Lok Sabha election drawing to a close, Telangana Rashtra Samithi (TRS) president and chief minister K. Chandrasekhar Rao has stepped up efforts for the formation of the Federal Front in the post poll scenario.

On Monday, Mr Rao flew to Kerala on a special flight and will proceed to Tamil Nadu. He also talked to Karnataka chief minister H.D. Kumaraswamy on the phone on Monday.

Mr Rao is assuming that neither the BJP nor the Congress will get a majority to form the government at the Centre and thus regional and other national parties will have a role to play if they are united under a Federal Front.

Mr Rao met Kerala chief minister Pinarayi Vijayan in Trivandrum on Monday and discussed the Federal Front and sought the support of left parties. He will meet Mr Stalin on May 13 in Chennai.

The latter two leaders have discussed the formation of a Federal Front earlier too and Mr Stalin welcomed the proposal. In fact, the DMK is a partner in the United Progressive Alliance led by the Congress party and they have tied up for the parliamentary elections in Tamil Nadu. Mr Rao wants the support of the DMK for the federal front in case the Congress is not in a position to form the government.

Elections are over in Karnataka, Tamil Nadu and Kerala, hence Mr Rao’s visit to these states. The final phase of the elections will be held on May 19.

In the week’s gap before the results are announced, Mr Rao is planning to meet Mamata Banerjee, Mayawati, Akhilesh Yadav and other regional party leaders.  He may also go to Delhi to meet some national leaders about the formation of the federal front.