People with expertise have a short window to make some fast money before the voting season draws to a close. 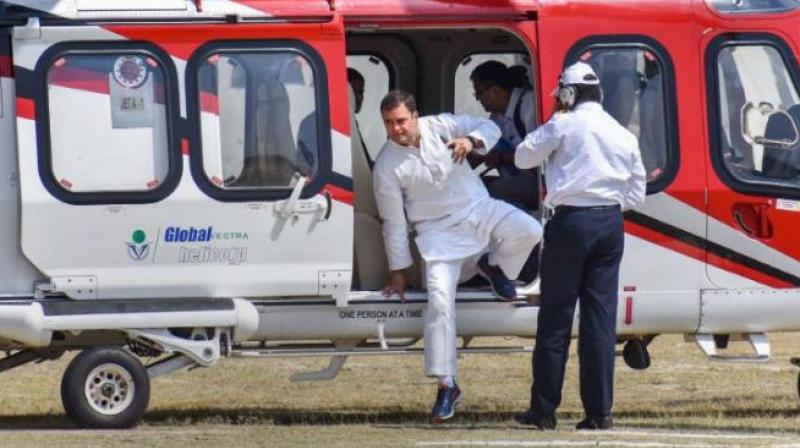 Helicopters which are a status symbol for some, are also in high demand. (Photo: PTI)

Mumbai: The world’s biggest election in which about 900 million citizens cast their vote and decide the future for next five years has created opportunities for a range of businesses.

This includes image makeovers, political slogan writing and bullet-proofing vehicles which are in high demand in India. People with expertise have a short window to make some fast money before the voting season draws to a close.

With such requirement, it also means a significant rise in election spending, that makes these elections the costliest poll on earth , reported Bloomberg.

According to New Delhi based think-tank, the Centre for Media Studies, expenditure would rise 40 per cent from last time to USD 7 billion.

Sudhanshu Rai, founder and chief strategist at communication firm Saints Art, said, “Every image is carefully crafted. It depends on the objective the client has. If he wants to portray himself as an educated politician, all publicity material will be designed that way.”

Amarpreet Kalkat, co-founder of Frrole, a company specialising in analysing social media data said, “We are advising them by analysing everything on social media platforms -- how are Twitter hashtags trending, what is the public sentiment on a topic, how are different parts of the country reacting to a particular news.”

Helicopters which are a status symbol for some, are also in high demand.

“The companies charge Rs 150,000 per hour for single engine helicopters and Rs 250,000 rupees for twin engine ones,” said Mark Martin, founder of Martin Consulting, who advises the Business Aircraft Operators Association, the main lobby group for the industry.

Sunchit Sobti, director of Laggar Industries Ltd., and his 70 staff are working to fulfil orders to customise vehicle with armour-plating that will withstand gunfire and grenade attacks while providing a comfortable ride on the campaign trail.

“So far, we have armoured 30 to 35 vehicles during this election and it’s a good number,” Sobti added.

Raaj Hiremath, managing director of Ushak Kaal Communications Ltd. and chief executive of Tandav Films Entertainment Pvt., said, “In terms of volumes, the advertisement, business is around Rs 25 billion for this year’s elections. And some 20 to 25 agencies must be working with political parties.”

The campaign has shifted away from traditional forms -– such as flags, posters, garlands, caps, badges -– onto social media and more visual mediums.