India   All India  07 May 2019  PM pays homage to poet-philosopher Basaveshwara on his birth anniversary
India, All India

PM pays homage to poet-philosopher Basaveshwara on his birth anniversary

K'taka Home Minister M B Patil also greeted followers of Basavanna, adding that the poet had introduced the first parliament in the world. 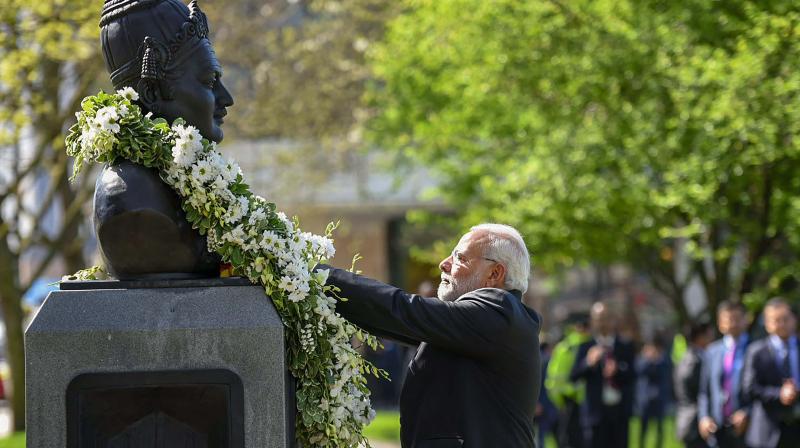 Bengaluru: Prime Minister Narendra Modi paid homage to poet-philosopher Basaveshwara on the occasion of his birth anniversary on Tuesday.

Taking to Twitter, Modi hailed the 12th-century poet, also known as Basavanna, as an 'iconic thinker' and a 'pioneering social reformer' who has a great impact on society even in the present day.

Paying homage to the venerable Bhagwan Basaveshwara on his Jayanti. An iconic thinker and pioneering social reformer, Bhagwan Basaveshwara worked throughout his life to make our society more inclusive. His emphasis on education and serving the poor continues to motivate millions.

"I wish all of Lord Basaveshwara's followers on his anniversary. He was a great reformer in the 12th century, who formed the world's first parliament. It had all the people both men and women, belonging to various caste groups especially the oppressed. A nation with equality and a casteless society was his dream," Patil said after attending an event in Bengaluru.

Considered to be one of the most revered saints by the Lingayat sect, Basavanna was a 12th-century philosopher, statesman and a Kannada poet in the Shiva-focused Bhakti movement.

He is also considered to be a great social reformer who stood for the rights of the underprivileged classes and women.

He rejected gender and social discrimination, superstitions, and rituals and introduced Ishtalinga necklace, with an image of the Shiva Linga to every person.

Known as the champion of equality, Basavanna introduced the concept of Anubhava Mantapa (hall of spiritual experience), where men and women from all socio-economic backgrounds were allowed to discuss spiritual and mundane questions of life without restraint.