If not in India, will Lord Ram's name be taken in Pak: Shah

Shah said that polls in West Bengal are for restoring democracy in the state. 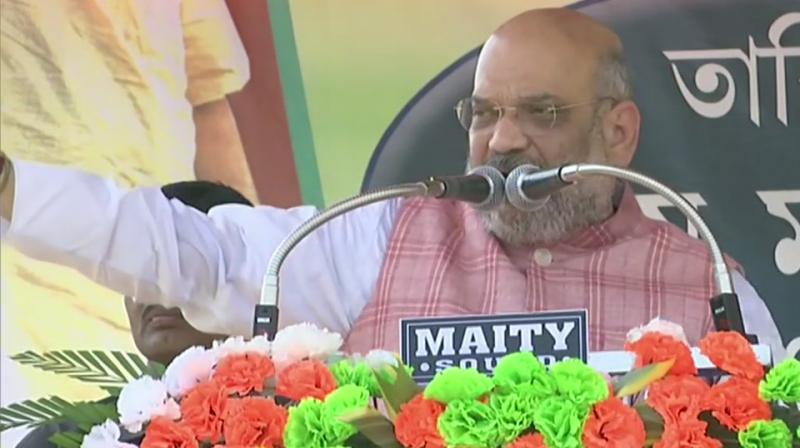 'Lord Ram is a part of the culture of India... Can anybody stop people from taking his name?' Shah said. (Photo: ANI)

Ghatal: BJP president Amit Shah Tuesday alleged that West Bengal Chief Minister Mamata Banerjee is not allowing people to chant 'Jai Shri Ram' in the state, and wondered if the Lord's name cannot be taken in India, will it be uttered in Pakistan.

Speaking at an election rally here, he said that polls in West Bengal are for restoring democracy in the state, where the BJP will win "more than 23 seats" out of the total 42 Lok Sabha seats.

"Lord Ram is a part of the culture of India... Can anybody stop people from taking his name? I want to ask Mamata didi, if Shri Ram's name is not taken in India, will it be chanted in Pakistan?" Shah said.

A video had appeared in the social media that showed Banerjee stopping her car at a place in West Midnapore district on Saturday, and chasing some persons who chanted 'Jai Shri Ram' as her carcade was crossing the area.

"The Narendra Modi government has given Rs 4,24,800 crore to West Bengal in its five-year tenure, but it has not reached the people, and, instead, gone to the syndicates," Shah claimed.

He said the UPA-II government under the then prime minister Manmohan Singh had granted only around Rs 1,32,000 crore to the state.

The BJP chief reiterated his party's resolve to implement the National Register of Citizens (NRC) in West Bengal to flush out illegal migrants from Bangladesh.