Malnutrition threatens a child’s physical as well as mental wellbeing for many years to come. 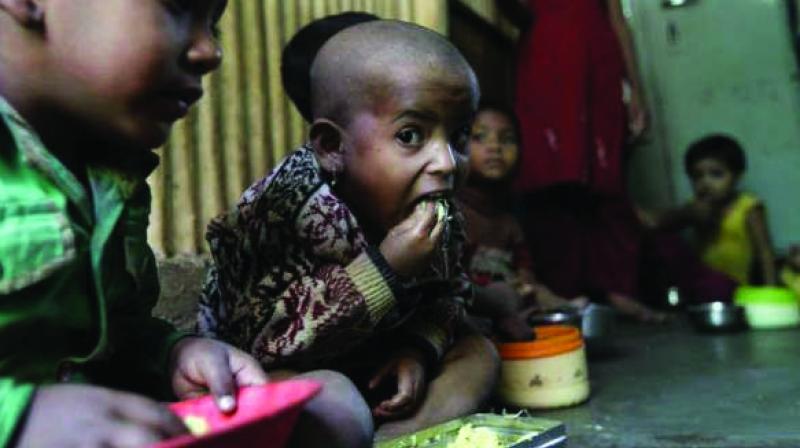 According to the Economic Survey (2017-18), child and maternal malnutrition posed the most challenging health risk of our times.

Despite the spectacular strides made in economic growth and having a technological boom, India still continues to struggle to attain freedom from hunger. It is bearing witness to a triple burden of malnutrition — the coexistence of undernutrition, micronutrient deficiencies and overnutrition. According to the Economic Survey (2017-18), child and maternal malnutrition posed the most challenging health risk of our times.

India accounts for more than three out of 10 stunted children globally, largely owing to a lack of good quality food, poor care and feeding practices, inadequate water, sanitation and health services. Other than increased susceptibility, the chronic impact of long-term malnutrition in human and economic terms is well known. Undernourishment is highly damaging to children and overshadows their childhoods, impairs their mental and physical development, and damages the country’s economic prospects. As the economist Dean Spears has written: “Because the problems that prevent children from growing tall also prevent them from growing into healthy, productive, smart adults, height predicts adult economic outcomes and cognitive achievement.”

The government appears to have awakened to the shame and has launched a National Nutrition Mission (NNM) and set aggressive goals; targeting issues regarding stunting, undernutrition, anaemia and low-birth weight in infants. The core idea behind this mission is better integration and stronger monitoring of various government programmes for young children as well as adolescent girls and mothers. A sum of `9,046 crores has been allocated for the NNM, for a period of three years (2017-2020). More than 10 crore people are expected to be benefited by the programme. The new approach is well crafted. Although it requires strong political will, if translated into action properly, the programme shows the potential for rich dividends.

Malnutrition threatens a child’s physical as well as mental wellbeing for many years to come. For many children, chronic malnutrition begins in the womb, with 20 per cent having a low birth weight. Ninety per cent of our brain develops in the first two years of birth and the quality of nutrition during this stage determines the long-term physical health, learning ability and future productivity. Undernourishment can lower a child’s IQ, increase the risk of diet-related non-communicable diseases such as diabetes and heart diseases, and reduce productivity. Going by NFHS-4 results, it appears that 40 per cent of our future workforce will be unable to achieve its full physical and cognitive potential. The World Bank estimates this to cost India’s economy $12 billion a year in higher healthcare spending and lost productivity. The well-known economist Dean Spears says the price of all this is far greater than the cost of fixing it.

Most of the neo-natal undernourishment cases can be attributed to pervasive nutritional deficiencies in Indian women. In India, 33.6 per cent of Indian women are chronically undernourished, and 55 per cent are anaemic, putting over half the women in the childbearing age at risk. The loss of gross domestic product to anaemia was estimated at $22.64 billion (`1.50 lakh crores) in 2016, more than three times the health budget of the country for 2017-18. And at the other end of the spectrum, over-eating is taking a heavy toll on people of all ages.

There are three major heads to be addressed while looking at the challenge of malnourishment: Nutritious food, clean water, sanitation and hygiene practices, and attitudinal change. According to the World Health Organisation, 50 per cent of malnutrition is associated with repeated diarrhoea or worm infestation issues, caused mainly due to unsafe water, inadequate sanitation and unhygienic practices. These health hazards reduce the capacity of the body to absorb essential nutrients required for growth and development in early infanthood. On average, Indians’ bodies are therefore smaller than those of people even in poorer countries where people consume fewer calories, notably in Africa.

Operating in silos curbs the spillover benefits available out of synergies from convergences of so many development programmes for women and children; these programmes need to be converged and efficiently implemented at the district level. The family of a newborn child is entitled to receive “Take Home Ration” worth `10,332 over a 45-month period, but the scheme is riddled with leakages and poor quality food supplements.

Despite the rise in institutional birth rates to almost 80 per cent, early initiation of breastfeeding (within one hour of birth) remains as low as 41.6 per cent. A child should be exclusively breastfed for the first six months of its life without any additional food or drink, not even water — there is an imminent need to promote this.

There is also growing evidence of the benefits to mother and child of initiation within one hour of birth. Early initiation of breastfeeding ensures skin-to-skin contact, which is important in preventing hypothermia and establishing the bond between the mother and her child. It also reduces a mother’s risk of post-partum haemorrhage, one of the leading causes of maternal mortality.

Colostrum, the antibody-rich, yellow liquid produced by the mother immediately after delivery and before commencement of secretion of milk, contains antibodies and essential nutrients, which act like the first “natural” immunisers for newborns, boosting the immune system and reducing the chances of neonatal mortality. Continued breastfeeding for two years or more, together with safe, age-appropriate and hygienically prepared foods, starting at six months of age, boosts long-term immunity. All this would require the mother to be withdrawn from her regular chores to be with the child in the first six months.

The recent amendment in National Maternity Benefit Act (NMBA) has provided six months of paid leave to women in the organised sector. However, this policy has no relevance for the women who work in the informal economy. Around 95 per cent women workers are in the informal sector and most poor women tend to get back to their routine work schedule within days of their delivery. In such conditions, it is very difficult to expect them to rest, gain weight, take care of their own health, and then provide the baby with exclusive breastfeeding for six months. In this context, the compensation of `6,000 under the Pradhan Mantri Matru Vandana Yojana to each pregnant and lactating mother is quite inadequate here.

Fortification of staple food vehicles such as flour, salt, oil and milk is now being seen as a crucial component for tackling food and nutrition security as well as child malnutrition. Since several staple foods produced, procured and consumed in the organised sector are not easily amenable to fortification, the government must mandate the use of fortifiable commodities in all its food-based schemes, including the midday meal scheme in schools, the Integrated Child Development Services (ICDS) and the public distribution system (PDS).

The full impact of the various interventions can be amplified if we adopt a multi-sectoral and integrated approach looking at maternal and infant health, water and sanitation, poverty alleviation, and behavioural change communications as inter-related challenges.