India   All India  07 May 2018  India needs a systematic overhaul in agriculture to ensure food security
India, All India

The composition of the food basket is increasingly shifting away from cereals to high-value agricultural commodities like fish, eggs, milk and meat. 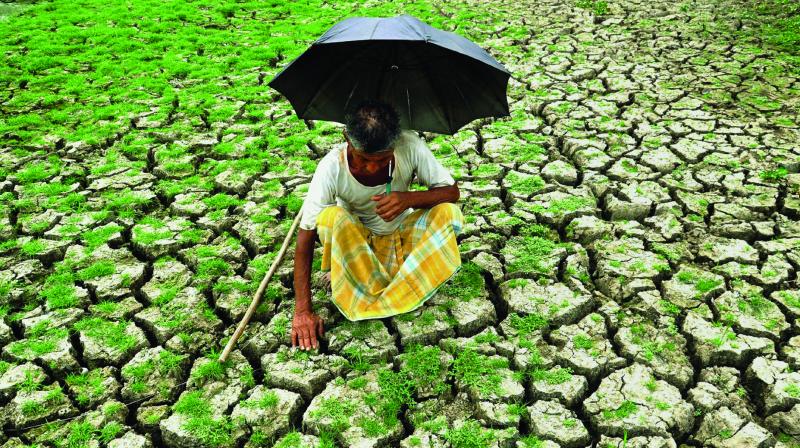 The deep crisis, which afflicts India’s agriculture sector, is not unknown. Farming has become an unviable occupation.

Food insecurity continues to be one of the most pressing challenges before India. Despite high rates of economic growth, the prevalence of undernutrition declined marginally from 210.1 million in 1990 to 190.7 million in 2016. Currently over one-fourth of the children are stunted in large states like Gujarat, Jharkhand, Karnataka and Madhya Pradesh, and over 40 per cent of the children are underweight in Jharkhand, Madhya Pradesh and Bihar. On the other hand, due to rising incomes, the rich and middle classes in urban areas are demanding a more diversified and protein-rich diet. The composition of the food basket is increasingly shifting away from cereals to high-value agricultural commodities like fish, eggs, milk and meat. As incomes continue to rise, this trend will continue and the indirect demand for food from feed will grow rapidly in India.

Will India’s food production be able to meet the growing demands of its population? The current agrarian situation does not present a particularly optimistic picture. Agricultural productivity in India is extremely low. According to World Bank figures, cereal yield in India is estimated to be 2,992 kg per hectare as against 5,401.4 kg per hectare; 5,362.6 kg per hectare; 7,318.4 kg per hectare and 4,453.2 kg per hectare in East Asia and Pacific, Euro area, North America, Central Europe and Baltics respectively. A study by Praduman Kumar, P.K. Joshi and Surbhi Mittal suggests that India will face a net deficit of three to five million tonnes in rice by 2030 and the deficit in pulses and oil seeds will widen rapidly.

The deep crisis, which afflicts India’s agriculture sector, is not unknown. Farming has become an unviable occupation. About one-third of the farmers in India do not like farming because it is not a profitable activity and 40 per cent are willing to give up farming if they could find a better source of livelihood. Despite this, agriculture employs about 49 per cent of the labour force in India. Indebtedness, the main reason behind the rising number of farmer suicides in India, has increased dramatically. According to figures from the 70th round of the National Sample Survey, about 52 per cent of the agricultural households in India are indebted with an outstanding loan of `47,000 per household. The states of Andhra Pradesh, Telangana and Tamil Nadu have the highest share of indebted households at 92.9 per cent, 89.1 per cent and 82.5 per cent respectively.

Research on agrarian distress has proliferated and most studies agree that a combination of policy-induced, technological and ecological factors is responsible for India’s agrarian crisis. Despite the fact that agrarian distress has been a favourite topic for economic research and the subject is now slowly getting the attention of India’s media, which has so far callously ignored the issue, long-term food security is no one’s concern. Policy actions have typically been in the form of loan waivers for agitating farmers. There have been counter reactions from the brigade, which is against any form of government spending in favour of the poor and destitute. The deep crisis in India’s agriculture sector indeed requires immediate measures but ignoring the ecological crisis and the challenges that climate change poses for India’s long-term food security is likely to be a grave policy mistake.

As a large developing country with a growing population, which is dependent on rain-fed agriculture, India is particularly vulnerable to climate change. The most significant impact of climate change will be felt through its impact on the country’s already stressed water resources. Several studies indicate that climate change will cause significant changes in inter-annual and inter-seasonal variability of the monsoon. The number of dry days and wet days has steadily increased since the 1970s. Currently about 54 per cent of the ground water wells are receding. Fluctuation in rainfall due to climate change will adversely affect India’s already depleted groundwater resources. The World Bank predicts that with a global mean warming of 2°C, above pre-industrial levels, India’s food water requirements will exceed green water availability. A mismatch between demand and supply of water will have far-reaching consequences on the country’s foodgrain production.

Climate models also predict an increase in the frequency of droughts in the north-western region. Increased frequency of droughts will have adverse impacts on foodgrain production, particularly kharif output. Rice, India’s staple food crop, is found to be most sensitive to extreme climate events. According to a report by the Intergovernmental Panel on Climate Change, water shortage and thermal stress will severely impact rice yields in India. Impacts on foodgrain productivity will be particularly severe in unirrigated areas. However, full impacts of climate change on agriculture are still not known to researchers. That is what makes climate change a particularly “wicked” problem.

Unfortunately, India is completely unprepared to tackle the impending crisis. Public investment in agriculture has declined steadily and policy approach towards the sector has been piecemeal. India’s long-term food security concerns must feature more prominently in the policy discourse. Given the challenges that climate change poses and the country’s vulnerability, India needs a systematic overhaul in its agriculture. Indian agriculture cannot afford to rely on unsustainable ways. Sustainable agriculture, which applies less pressure on natural resources, is the need of the hour. Small farmers also need support from the government to adapt to climate change and public investment in agriculture and research also needs to be stepped up. But is anyone listening?

The writer is with the Observer Research Foundation