India   All India  07 May 2017  Stay away from protests: Hizbul Mujahideen to girl students
India, All India

Stay away from protests: Hizbul Mujahideen to girl students 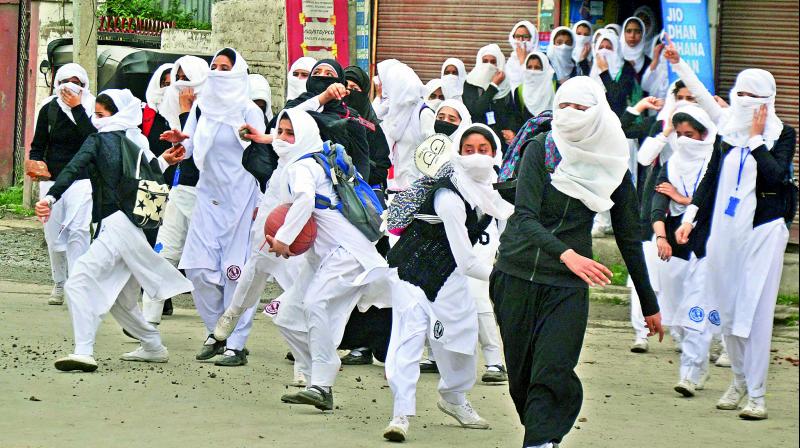 Girl students pelt stones at security personnel during clashes in the vicinity of Lal Chowk in Srinagar on Monday. (Photo: PTI/File)

Srinagar: Student protests in the Kashmir Valley have spread to new areas, pushing the authorities into tizzy. Scores of students and policemen were injured in day-long clashes on Saturday, officials said.

Meanwhile, militant group Hizbul Mujahideen has asked the girl students to stay away from protests. Its purported commander Zakir Musa has in an audio message asked the female students to abandon stone-pelting and stay in their homes. “Your brothers are alive yet,” he says, adding, “I want to tell the sisters that whatever you are doing is against Sharia law as pelting stones without being in veil is un-Islamic. In Islam, there are no such protests and that is why Allah is punishing us in the form of occupation (sic),” he said.

The latest round of protests and subsequent clashes were reported from Handwara in frontier district of Kupwara and Newa in southern Pulwama district. At both places, the security forces swung bamboo sticks and fired teargas canisters to quell the protests and stone-pelting mobs of students, reports received here said.

Last month, about 60 students of a degree college in Pulwama were injured in police action following student unrest. Since protests by students has become a daily occurrence in the Valley and has left nearly 200 students and many security personnel injured.

Police sources and witnesses said that Handwara degree college students on Saturday took to the streets chanting anti-government slogans. As they tried to walk along the streets of the town to protest the arrest of fellow students in Pulwama, the police came in their way, leading to clashes that left about two dozen students, including girls, injured. The condition of one of the injured girl students is stated to be critical.

Amid the protests, the student unfurled Pakistan’s national flag atop the administrative block of the college, a report said.

Meanwhile, the police on Saturday said that it has arrested three alleged over-ground workers of militant outfits in Shopian district and recovered three Chinese hand grenades on their disclosure.

The trio was taken into custody during a routine checking by the police between Chekora and Hajipora villages of the district, the official said and identified the accused as Akeel Ahmad Malla, Asif Abdullah Wagay and Aamir Hussain Ganaie.