India 'strongly against' war, 'on side of peace' 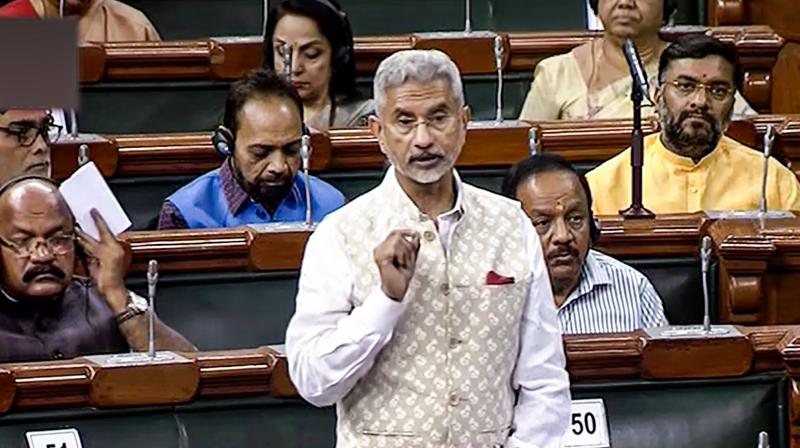 New Delhi: Asserting that India was on “the side of peace”, external affairs minister S. Jaishankar told Parliament here on Wednesday that New Delhi was “strongly against” the ongoing Russia-Ukraine conflict as “no solution can be arrived at by shedding blood, and at the cost of innocent lives”.

Mr Jaishankar said India was “deeply disturbed” by reports of civilians being killed in the Ukrainian town of Bucha and strongly condemned the killings, but made no mention of Russia, which is facing global criticism over the massacre.

“This is an extremely serious matter, and we support the call for an independent investigation,” the minister said, while replying to a short duration discussion on the Ukraine-Russia conflict in the Lok Sabha. The minister did not name any side over these killings.

Mr Jaishankar said that in this day and age, dialogue and diplomacy are the right answers to any dispute. “If India has chosen a side, it is the side of peace, and it is for an immediate end to violence. This is our principled stand,” he said.

Mr Jaishankar said India continues to press forcefully for an immediate cessation of hostilities and encouraged talks between Ukraine and Russia, including at the level of their Presidents. “The Prime Minister (Narendra Modi) has himself spoken to them both in this regard. This was precisely the message that was conveyed to Russian foreign minister Sergey Lavrov when he was in Delhi,” he said.

The minister said that if India can be of any assistance, “we will be glad to contribute” He said the ground situation calls for urgent humanitarian relief and India has already given 90 tonnes of relief material. “Ukraine’s deputy prime minister Yulia Svyrydenko called me a few days ago to request the supply of more medicines. The House will be glad to know

that this is under way and delivery should start very soon,” he said.

On the Ukraine crisis’ impact on the global economy, Mr Jaishankar said the government’s focus was to soften its impact on “our own economy” and was working with the international community to mitigate the conomic hardships that are resulting from this conflict.

“At a time when energy costs have spiked, clearly, we need to ensure that the ordinary person in India is not subject to an additional, unavoidable burden,” said the minister. He noted that these are legitimate pursuits of national interest by India and are similar to what other nations are doing from their particular perspective. “Attributing a political colouring to it is uncalled for. It is unfair,” he said.

Mr Jaishankar said in a complex and globalised world every nation takes into account the reality of interdependence. “Even as they express their position in words and deeds, they also adopt policies that safeguard the well-being of their population. As a result, we have seen, even in Europe, that the energy flows continue despite the tension,” he said.

Mr Jaishankar said the world order will change partly because of the consequences of the Ukraine-Russia conflict. “To my mind, the solution is, we have to be stronger; we have to reduce our dependency on the external world. It can never be total. But the way to deal with the new world order is really ‘Atma Nirbhar Bharat’… It is not just an economic policy.”

On financial transactions with Russia after sanctions by the West, the minister said that the government was trying to stabilise the economic transactions between India and Russia. “At the moment, there is an Inter-Ministerial Group which is led by the finance ministry seeing how the payments issue can be best addressed. There are experiences from the past which are relevant in this regard,” he said.

Meanwhile, India’s permanent representative to the UN, T.S. Tirumurti, on Wednesday morning (IST) also condemned the horrific killings of civilians in Bucha and demanded an independent investigation. “The situation in Ukraine has not shown any significant improvement since the Council last discussed the issue. The security situation has only deteriorated, as well as its humanitarian consequences. Recent reports of civilian killings in Bucha are deeply disturbing. We unequivocally condemn these killings and support the call for an independent investigation,” he said during a discussion at the UN Security Council in New York. Pointing out that “the impact of the crisis is being felt beyond the region, with increasing food and energy costs, especially for many developing countries,” New Delhi said that “humanitarian action must always be guided by the principles of humanitarian assistance, that is humanity, neutrality, impartiality, and independence”, and that “these measures should never be politicised”. India has so far not condemned Russia for its military offensive in Ukraine, even as the West led by the United States is stepping up the pressure on India to take a tougher line on Russia.

The Lok Sabha also passed the Weapons of Mass Destruction and their Delivery Systems (Prohibition of Unlawful Activities) Amendment Bill 2022, which bars funding of weapons of mass destruction. The bill, introduced by Mr Jaishankar, also gives the government powers to freeze and seize the financial assets of people involved in such activities. This bill was introduced as part of India’s international obligations relating to the WMDs.