Who will teach the teacher?

The controversial speech by a teacher raises disturbing questions about the role of academics in society. 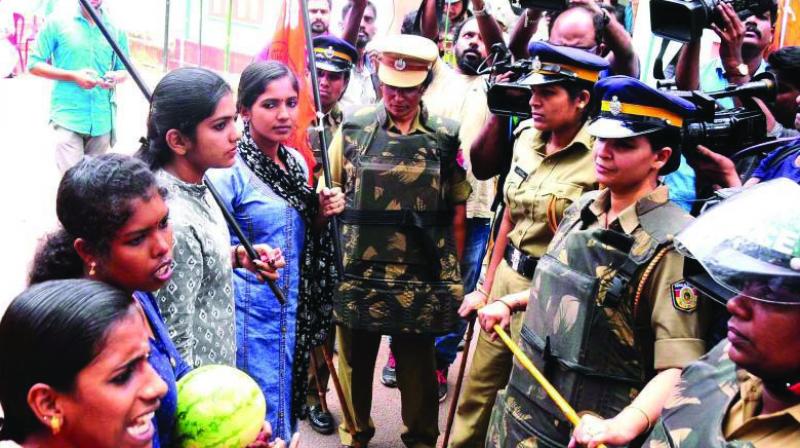 The title comes from the statement of a foremost philosopher. When one views the recent You Tube video, its notoriety disproportional to its short life, of an academic in Kerala making a speech one cannot help asking this question. Occasion apart, the presentation of the academic brings up some disturbing questions about the role of academics in society. The thing is disturbing all the more because the academic in question is not just a higher education teacher but one who teaches the prospective teachers and at times the existing ones. He is an assistant professor with a PhD, in a teacher's training college. Was it, probably, Bernard Shaw who said that those who can't do teach; those who can't teach teach the teachers!

The teacher has been chargesheeted on the complaint of a student and the progressive women's forum called NISA has alleged that the State Women's Commission has failed in intervening in the matter and has also requested strict action against the teacher. To address the above mentioned issue as a religious one, or as one of religious freedom is to misplace it and miss the crucial points. Religion is a wonderful human institution which has its undeniable spiritual role. The issue actually is whether an academic who is on the government pay roll can make money by dealing in regressive ideologies and doing psychological counselling, which is an extremely professional matter dealing with human life. One cannot help recalling a respected medical professor of psychiatry in a leading medical college in Kerala the other day saying that there is not a single person who can teach Lacan, a psychoanalytic thinker, to medical professionals here. Lacan of course is an extremely difficult thinker. But that is what the discipline of psychology is and what human mind is.

Now the disturbing questions the speech carries is about the ethics of teaching. What is the role of a teacher and especially of an academic in social transformation? Is s/he there to perpetuate the existing dominant and exploitative ideologies? What if he doesn't even know what an exploitative ideology is? What if he doesn't make a difference between religion and modern education? Can a teacher especially on government payroll or any one for that matter give counselling without being a trained and certified psychologist? Can an academic who is a highly paid government employee find time for and earn money by doing unauthorised professional work? Doesn't an academic even know what he knows and does not know?  Firstly, the fact throws light on the situation of at least a few academics in Kerala and elsewhere indulging in money making through various modes of private work including coaching. The present writer remembers -- after rejecting an invitation to take private NET coaching classes - the inviter innocently justifying saying that some good academics do visit and that he considers it as UGC extension activity. These are days of public private partnership!

Paulo Freire, the foremost educational thinker, is an indispensable part of teacher training courses across the world. One of the world's leading educationalists, his greatest work on education itself is called Pedagogy of the Oppressed. His book is "dedicated to the oppressed and those who suffer with them and fight at their side." The college teacher here boasts of having counselled a seventh class student into cutting his hair "properly" after "two and a hours of counselling". What must have transpired between the self-styled counsellor and the impressionable mind of twelve years' getting browbeaten into cutting his hair "properly"? Would the counsellor have brainwashed the child into believing the opposite of what Khalil Gibran said; that his body is not his but somebody else's? For, Gibran the great seer poetsaid of children: "They are the sons and daughters of Life's longing for itself". What if some irreparable damage is done to a sensitive mind in the process of an ill-done counselling? He once identifies the child as a "ruinous son" (mudiyanaya puthran) though as a pun. It is worth recalling that ours is a place in which a poor Dalit research student died of breast cancer by following the idiotic advice of an insensitive academic considered as a "father figure" by the student .  The tone, tenor, and idiom of the speech is appalling. It is notable for its naive and insensitive comparisons, insinuations, holier than thou attitude, complete disdain for and disavowal of the younger generation and I am ok and you are not okness and above all misogyny.

When one goes back to think of the "oppressed" in our community; who are they? Aren't women, children, elderly, physically and mentally challenged along with various denominations of minorities oppressed in our society? Isn't patriarchy a dominant ideology especially of our society?  Hectoring the girl students to dress according to the whims and fancies of others, teacher or whoever it is, is it part of modern education? The frequent references to and advice against the "improper dressing" of our female is very much part of our cultural imaginary. There is deliberate attempt from various quarters to dictate to our woman "what to wear". This is nothing but a blatant form of domination upon the women. This could only be considered as dragging them two steps back from the one step they have taken.

If not "properly" dressing "why not fully expose yourself?" the speaker asks the girls once. The speaker laments that the children now are becoming thanthonis (roughly, do it yourselfers).Thus the speaker ends his thesis on the "destruction of the modern families." Ironically Immanuel Kant's "What is Enlightenment?", perhaps one of the greatest essays in philosophy, which ushered in modern human, begins with saying that maturity is the ability to use one's own understanding without the guidance of another. In short isn't education after all to make thanthonis? Of course not violent.

The writer is assistant professor of English, Sankaracharya University