Opposing the bail plea, the public prosecutor Pokarram Vishnoi said that this case cannot be compared with other cases against him. 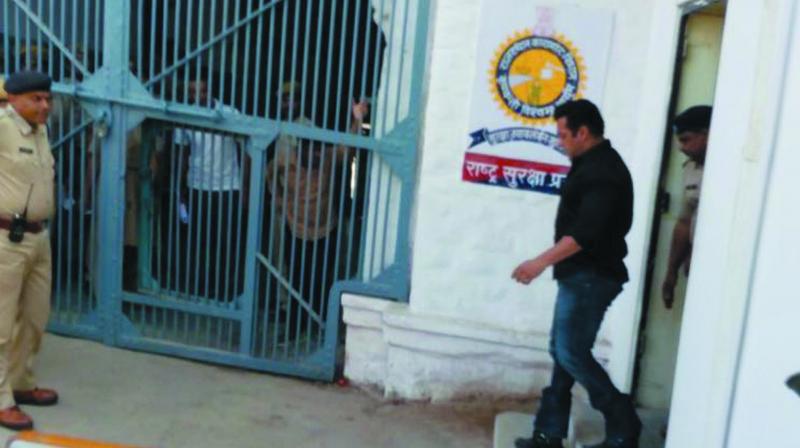 Jaipur: Salman Khan will spend another night in Jodhpur Central Jail and may be more in case his bail application is rejected. This development comes after district and sessions court reserved its verdict in a 1998 blackbuck poaching case to Saturday.

After hearing Salman’s lawyer and public prosecution, Judge Ravindra Kumar Jain said that he will take up the matter after going through entire case records before deciding the bail application. Salman was not present in the court.

Salman’s lawyers — Hastimal Saraswat and Mahesh Bora — expressed doubts over witnesses and recoveries, claiming that eyewitness accounts were unreliable, and therefore the punishment to the actor is harsh. The lawyers had also cited acquittal in other cases in the 51-page bail plea submitted in court.

“We argued for bail in the court. Basically the eyewitness is not reliable... the trial court has convicted Salman on the basis of basically just one eyewitness,” Mr Bora told reporters in Jodhpur. 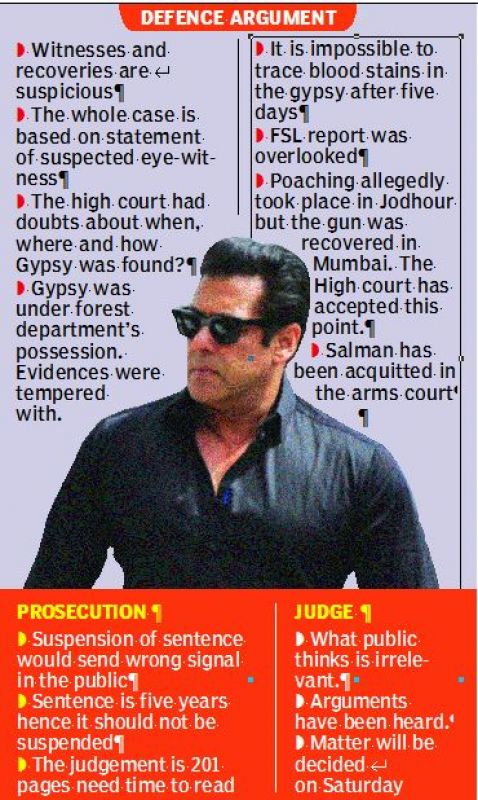 “How can villagers reached the spot several kilometres away by hearing gun shot,” Mr Bora asked. He asked if Salman stayed there till the villagers reached?  “Salman has been acquitted in three other related cases. He can be granted bail on that basis. Whenever, he was summoned he has appeared in the court. He was never in jail during this period. It would not be appropriate to keep him in jail now. He has been framed,” Mr Bora argued.

Opposing the bail plea, the public prosecutor Pokarram Vishnoi said that this case cannot be compared with other cases against him. Unlike cases in which he was acquitted, there are eye-witnesses in this case. The arguments by the defence lawyer are not tenable for bail application. They are appropriate for the appeal against the punishment, he said.

However, the judge said that he had received records related to this case in the morning, hence, he needed some time to read it. Public prosecutor has also applied for the record under CrPC Section 389. After reading it, the prosecution will file its reply followed by rejoinder only then the court would pronounce its decision.

In case, the bail application is rejected, Salman will have to spend two more days in jail because of weekend. He will then have to apply for bail in the high court on Monday.