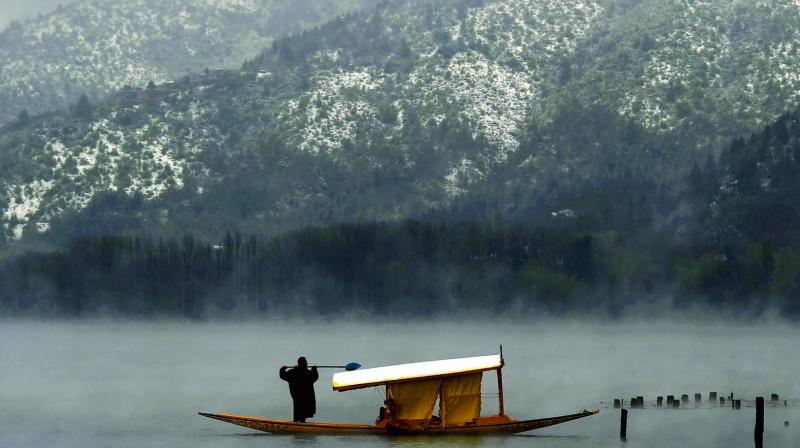 A boatman clears snow from his Shikara at the Dal Lake in Srinagar on Thursday. Srinagar and other parts of Kashmir have been experiencing heavy rain and snowfall, a rare occurrence in April, for the past three days. (Photo: PTI)

Srinagar: Days of incessant rains and unexpected snowfall overnight on Thursday morning in Srinagar and other parts of the Valley created a flood-like situation in many parts of Kashmir.

At least two persons, including a minor girl, were killed and several others were injured in weather-related incidents whereas two persons are missing following a cab they were travelling in skidded off the road and fell in a mountain stream in Kokernag area of southern Anantnag district. Scores of residential houses have been damaged and communications disrupted across the Valley and some parts of Jammu region.

In multiple avalanches reported from various hilly areas, including Kargil, extensive damage has been caused to property, including Army installations. In one such incident, an Army post was buried in Kargil’s Batalik sector. Officials said that while three soldiers were rescued, the fate of their two colleagues is not known.

However, the authorities said that the water-level in Jhelum, the main river which flows through the Valley before entering Pakistan, has crossed “flood alert” and not “danger” mark and asked people not to panic.

At 6 pm, the gauge reading of Jhelum at Ram Munshi Bagh in Srinagar had touched alert level of 18 feet, the officials said.

While the rains and snowfall have disrupted communications with landslides, water-logging and washing away of some bridges led to the closure of several roads including the Srinagar-Jammu highway.

The cherry, almond and pear crops are also faced with a serious threat. Also, power supply to many areas was snapped and potable water supply too has been disrupted. Swelling rivers and streams set off panic buttons as the worst devastation caused by September 2014 floods is still haunting people.

The authorities have set up helplines in Srinagar and at all other district headquarters of the Valley and the weatherman has reassured that there would be overall improvement from Friday.

Earlier on Thursday, Kashmir’s divisional commissioner Baseer Ahmed Khan announced closure of schools and colleges till April 9 in view of the hostile weather and disruption in communications. He admitted that most water bodies in the Valley including rivers, lakes and streams were swollen but said “there is no reason to panic.” Yet, he asked the people, particularly those living close to Jhelum and other water bodies, to remain vigilant and take precautionary measures.

He said that the J&K Irrigation and Flood-Control Department has alerted its staff to be present at their places of posting round the clock so that the water level in local rivers, lakes and streams can be continuously monitored.

Director General of Police, Shesh Paul Vaid, said that police teams have been fanned out to launch relief and rescue operation in affected areas. He also said that the police has established emergency help lines and control rooms in all the district headquarters in the Valley and “put its men on high alert to meet any possible challenge and eventuality”.

Officials said that a youth identified as Aaqib Manzoor Rather was electrocuted and two other persons were injured when they came in contact with a fallen power transmission in Hamray village of north-western Baramulla district on Thursday morning. They along with some others were on way to Pattan township to participate in an Army recruitment rally, the police officials said. In Kupwara, a minor girl Shabana Saleen was drowned to death in a swollen stream in Hayhama area of the frontier district, the police said.

The police said that it along with officials State Disaster Relief Force (SDRF) rescued five persons from the Brangi Nallah in Kokernag area of southern Anantnag  district. However, two other persons who were travelling with him in a Tata Sumo cap have gone missing after it skidded off the road and fell into the mountain stream.

The authorities also said that all 34 people stranded following flash floods in Kalai area of frontier Poonch district were also rescued. Scores of families were shifted to safer locals in Sopore area of Baramulla and in Kupwara district, a police spokesman here said.

Chief Minister, Mehbooba Mufti, held an emergency meeting with government officials during which she asked them to immediately set up a unified control room to monitor the situation. She also directed chalking out contingency plans for the flood prone areas and make available nearby buildings in case of emergency evacuations, an official spokesman said.