India   All India  07 Apr 2017  Let the naturally dancing Teesta flow as it wishes
India, All India

Let the naturally dancing Teesta flow as it wishes

Mamata Banerjee has a strong logic for her reservations against the bilateral water treaty. 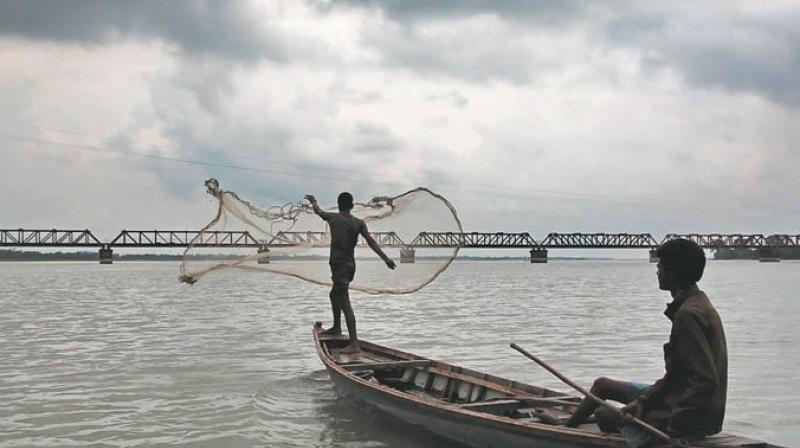 The ground realities against the Teesta waters treaty are felt by geoscientists unlike the techies most of whom are over-committed to corporate construction of interests and close to decision-makers.

Unless a miraculous series of events with unseemly diplomatic manoeuvres takes place, the possibility of signing the Teesta water-sharing agreement between India and Bangladesh during the visit of Bangladesh Prime Minister Sheikh Hasina Wajed between April 7 and 10 is remote. One of the main obstacles to get the treaty signed up is objection from the West Bengal chief minister Mamata Banerjee apprehends an ill-effect on thousands of farmers solely dependent on Teesta waters. Inexplicably enough, a concerted campaign is on to malign her, mainly from political interests wanting to disempower her, and the government, run by the All-India Trinamul Congress — by hook or by crook. Their right to fight for ousting the maverick CM and the AITC-led government is granted, provided it is done through parliamentary and peaceful means. The act of slandering and misrepresenting of facts about Teesta out of blissful ignorance and with narrow political motive irritates earth scientists specialising in sedimentology, engineering geology and geomorphology in understanding Teesta (geological spelling) river avulsion which is the natural process making a river flow divert out of the channel into a new permanent course on the adjacent floodplain.

Ms Banerjee has a strong logic for her reservations against the bilateral water treaty. She fears that it may lead to drying up of water in the Teesta basin. She is backed by Dr Kalyan Rudra who headed the one-man commission on Teesta water-sharing which was set up by the present state government. Months before taking up the assignment, Rudra stated in an article that the TBP’s projections are “excessively optimistic”, taking into account that “it has no reservoir and depends exclusively on diversion barrages with no storage capacity. The Teesta was untamed in its upper catchment when the TBP was formulated. The series of proposed dams in the upper reaches will reduce the available discharge for irrigation as each hydropower project is expected to consume at least five per cent of the running water in the river.” The geographer, who developed specialising on rivers and avulsions thereof through extensive visits along river basins, added in lamenting tone: “The snow-capped peaks, precipitous cliffs, fast-flowing rivers and green slopes of the Himalayas attract tourists from across the world. The road journey to north Sikkim holds one enthralled with the beauty of the dancing and roaring Teesta as it flows through deep valleys with thick green cover. But if the eight hydroelectric dams proposed on the Teesta (six in Sikkim, two in West Bengal) are to be built, the dancing river will be silenced’

Soumitra Ghosh of the North Eastern Society for Preservation of Nature and Wild Life (Nespon) which, based at Siliguri in north Bengal has done several field surveys in the region during the last two decades, told this writer, “there can hardly be any surplus water in Teesta especially during the lean season. With the upstream dams storing large amounts of water and the necessity of meeting the needs of downstream farmers in West Bengal, I don’t see any visible surplus. The figures about seasonal availability of river water at particular points must be brought into the public domain. For no reason, there is secretiveness about this.”

Originating in the Himalayas, the 393 km-long Teesta flows through Sikkim and West Bengal before entering Bangladesh. Although rich in biodiversity, some 44 km stretch of it is earthquake-prone with an ecologically and geologically fragile terrain. Yet over half a dozen of hydel projects have been planned on the river in the upstream of Sikkim. Indigenous Lepcha and Bhutia communities in Sikkim as also West Bengal came out to turn the tranquil and pristine habitat into a battleground between the government and the communities. Nespon has been sympathising with them. A formidable community offensive, notably by NGOs like the Affected Citizens of Teesta (ACT) and Sikkim Bhutia Lepcha Apex Committee (SIBLAC), forced the Sikkim government to cancel construction of ten dams.

Nonetheless, the Government of India is unseemly inclined to dam the 13 km-free-flowing stream for hydel power. About 75 km of it is already either in reservoirs or diverted through tunnels for hydropower generation. The imperative for environmental and social assessments necessary is pooh-poohed by Delhi which is apathetic towards addressing the potential long-term cumulative impacts of the dams, associated with the proposed hydel projects (some having been already on stream like the 510 megawatt Teesta V-dam at Gajoldoba in Jalpaiguri district of West Bengal. The inexplicable zeal, bereft of the high possibility of reduced flows downstream, goes unabated. Which is why the power, coal, renewable energy and mines minister Piyush Goyal reiterated that hydel projects under the Teesta Urja Ltd of Sikkim would soon start generating 1,200 MW power in north Sikkim with an investment of over Rs 9,000 crores.

The ground realities against the Teesta waters treaty are felt by geoscientists unlike the techies most of whom are over-committed to corporate construction of interests and close to decision-makers. More disturbing are some commentators who over-emphasise the diplomatic compulsion of building amity with Bangladesh. India genuinely needs camaraderie with Bangladesh but should not lay unrealistic assurances. A seasoned Delhi-based commentator wrote that but for the backing out by Mamata Banerjee at the last minute, the treaty would have been inked in September 2011 when the then PM Manmohan Singh made a visit to Dhaka. The commentator has suggested that the present PM use Article 253 of the Constitution that empowers the Union government to conclude any treaty without consultation with the state governments. This suggestion is a provocation to trample federal principles under foot.

Another media-hyped expert in Indo-Bangladesh and Saarc diplomacy keeps wooing Ms Hasina as the “most trusted friend of Narendra Modi” for demolishing hideouts of extremists of India’s Northeast in Bangladesh as if India should sign treaty without bothering about the feasibility. In an openly tendentious manner to belittle Ms Banerjee, he asserts that the latter’s reservations against the treaty would not only affect India’s fraternal relationship with Bangladesh but help Pakistan too. At home in wild assumptions, such pundits alike, accuse

Ms Banerjee, proving their pathological chagrin against her, but are mysteriously silent on Hasina government’s appeasement towards Hefazat-e Islam which demands communalisation of school textbooks in the interests of political Islam.

“Teesta is a unique river, having no parallel anywhere in the world”, the late Devashis Chatterjee, formerly senior deputy director-general, Geolgical Survey of India and a rare-breed geoscientist of his time, once told me. Dr Mamata Desai, former head of the department of environmental sciences, Netaji Institute for Asian Studies, “Teesta is an antecedent river flowing through inverted topography, younger beds on river bed and granite gneiss on the hill tops. This unique geographical and geological features have made this river unique”. Desai stood by the West Bengal government on Teesta water sharing in September 2011.

It is one thing to support the idea of sharing Teesta waters with Bangladesh but ignoring the reality that Teesta has been gradually drying up is to create a misleading perception. Let the naturally dancing Teesta flow as it wishes, never to a self-destructive tune.