Based on the results, passengers who test negative to be allowed to come to the country later 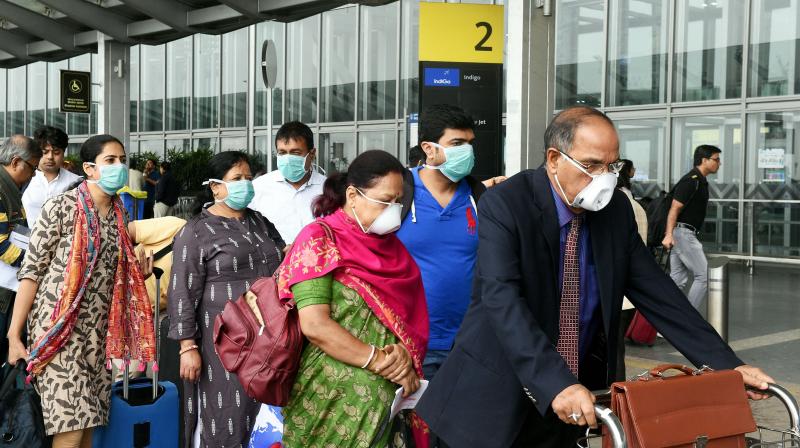 assengers wear masks as preventive against coronavirus, at NSCBI Airport, in Kolkata (PTI)

New Delhi: A flight from Tehran brought swab samples of Indians in Iran to New Delhi on Saturday, who are suspected of having Covid-19 coronavirus infection, an airport official said.

The flight, operated by Mahan Air, returned with many Iranian nationals on Saturday morning, an official at the Indira Gandhi International Airport said.
On Friday, officials said around 300 swab samples of Indians suspected of having  coronavirus infection would be brought in a ferry flight from Tehran.

The number of swabs that were brought to the country as well as the number of passengers who took the return flight could not be immediately ascertained.
Official sources said the swabs would be taken to the National Institute of Virology (NIV), Pune for tests.

Aviation regulator DGCA's chief Arun Kumar, on Friday, said around 300 swabs are expected to be come in the Mahan Air flight.

Based on the outcome of the tests, those passengers who test negative would be allowed to come to the country later, he added.

There are around 2,000 Indians in Iran, one of the countries which have been severely affected by the coronavirus outbreak. A similar number of Indians are also there in the Persian Gulf country.

On Friday, Civil Aviation Minister Hardeep Singh Puri said evacuation of Indians from Iran was being planned in consultation with the health ministry and the Iran government.