The Congress chief also made it clear to the diplomats that the party is committed and united in carrying forward the fight against terrorism. 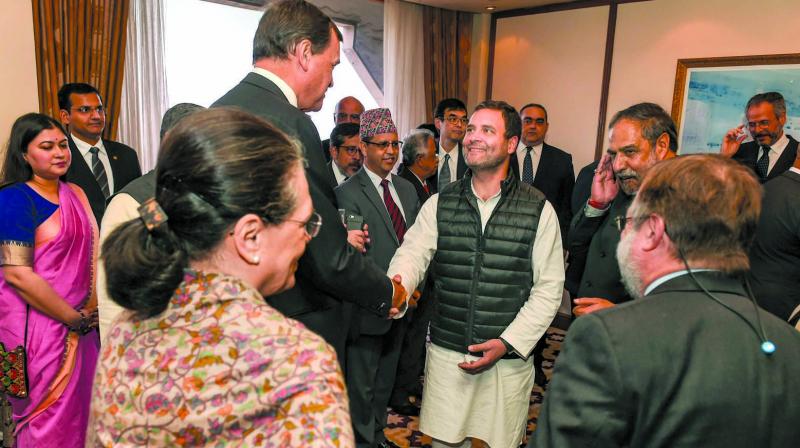 Rahul Gandhi greets the ambassadors/high commissioners of G-20 and neighbouring countries during a meeting in New Delhi. (Photo: PTI)

New Delhi: Top Congress leaders Rahul Gandhi, Sonia Gandhi and Manmohan Singh interacted with ambassadors of G20 member-countries at a luncheon meet in New Delhi on Wednesday, where the party leadership shared its economic and political vision ahead of Lok Sabha elections.

Significantly the Pakistan Ambassador was not invited to the meet which was attended by the ambassadors of the United States and China, the UK High Commission-er among others, Congress leaders said.

the Congress president also met the ambassadors of neighbouring countries, and discussed with them issues of regional, global, strategic and economic importance, they said.

The Congress chief also made it clear to the diplomats that the party is committed and united in carrying forward the fight against terrorism. The meet, held at a local hotel, was earlier slated for February 15 and had been cancelled in the wake of the Pulwama terror attack on February 14.

Mr Gandhi later said he enjoyed the exchange of ideas and looked forward to continuing the dialogue with the envoys.

Senior Congress leader Anand Sharma, who was the host, said there were requests from heads of various missions for a meeting with the Congress leadership and this was the best structured way to engage.

“Today I met with diplomats of the G-20 nations & some neighbouring countries. We discussed a wide range of issues & are united in our fight against the scourge of terrorism. I enjoyed the exchange of perspectives & ideas & look forward to continuing our dialogue,” he said on Twitter while sharing some pictures of the luncheon meeting.

"It was a meaningful engagement and a good meeting where global, regional, political and economic matters were discussed," Mr Sharma said after the meeting.

The Congress president also shared his party's vision, including its economic and industrial policies, for revival of agriculture sector and jobs creation, ahead of general elections, Mr Sharma said.

Mr Gandhi is learnt to have first interacted with the ambassadors jointly for half an hour and then sat down at each table and shared his thoughts with them separately. The meeting lasted for almost three hours.

The Congress chief also made it clear to the diplomats that the party is committed and united in carrying forward the fight against terrorism.

Among the neighbouring countries whose diplomats were present at the luncheon meeting were Sri Lanka, Bhutan, Nepal, Bangladesh and Afghanistan.