The home minister has appealed to political parties to ensure that those found desecrating statues are dealt with strictly. 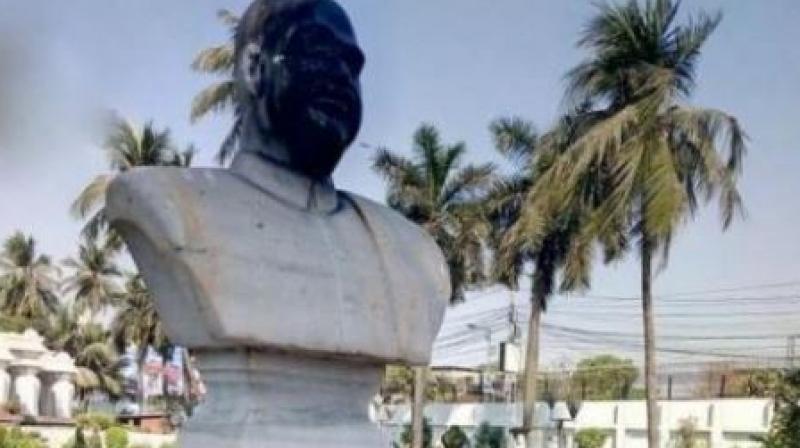 A bust of BJP icon Syama Prasad Mookerjee was blackened and its features smashed with a hammer in Kolkata’s Keoratola crematorium. (Photo: ANI/Twitter)

New Delhi: Taking a serious view of the desecration of statues in various parts of the country, the Home Ministry on Wednesday issued a second advisory, its second in the day, holding district magistrates and superintendents of police “personally responsible” for such incidents of vandalism.

The fresh advisory came a few hours after the ministry, in its first advisory, told all states and union territories that incidents of toppling and damaging of statues must be checked immediately and stern action should be taken to prevent such incidents.

“The DMs and SPs will be personally held responsible for any such incidents of vandalism of statues,” a home ministry official said, quoting the second advisory.

The state governments and union territories were told to ensure that DMs and SPs take all possible action to control the law and order situation in their areas of jurisdiction. They were advised to monitor the situation closely and take stringent action like arrests, prompt investigation and prosecution of the accused.

The DMs and SPs were told that they must ensure that the police keep strict vigil on anti-social elements, social media and rumour-mongers and take strong action against anyone indulging in any kind of violence or inciting violence, the official said.

The home ministry, in its second advisory, also reiterated the earlier directions on damage of statues and advised preventive action, including patrolling and firm control over anti-social elements.

Prime Narendra Modi has also expressed his strong disapproval of incidents of vandalism of statues and spoken to Union Home Minister Rajnath Singh on the matter.

The home minister has appealed to political parties to ensure that those found desecrating statues are dealt with strictly.

Two statues of Communist icon Lenin were brought down in Tripura following the BJP’s emphatic win in the state over the Left, which was in power for more than 25 years.

On Tuesday, the home minister called up Tripura Governor Tathagata Roy and DGP A K Shukla and asked them to ensure peace and check incidents of violence till a new government is installed in the state.

Union Home Secretary Rajiv Gauba had also spoken to the DGP and said all possible steps must be taken to maintain law and order, check violence and restore peace and public order. The ministry said enough central and state forces were available at the disposal of the state government to tackle the situation.