Section 144 in Tripura areas as CPM complains of attacks

In the recent Assembly elections, the BJP demolished the Left citadel in Tripura, winning a two-thirds majority with its ally IPFT. 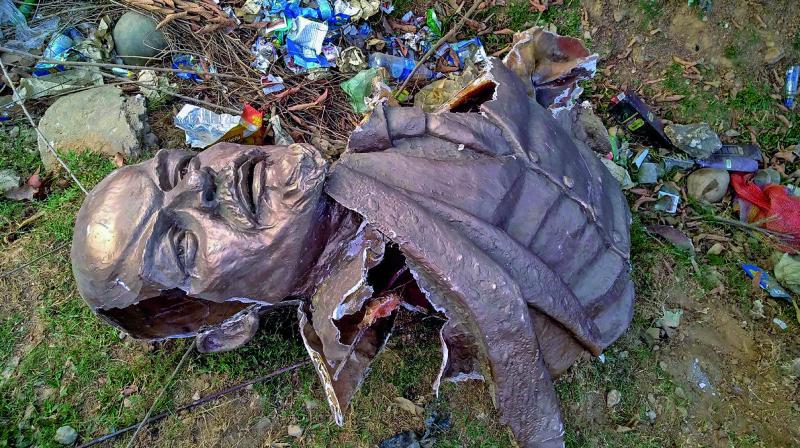 Remains of the five-foot-tall statue of Lenin which was allegedly demolished by a pay-loader at Belonia in Tripura on Monday afternoon and was thrown at the nearby jungle. The statue, made of fiberglass, was inaugurated at College Square at Belonia a few months back by CPM politburo member Prakash Karat. (Photo: PTI)

Agartala/New Delhi /Kolkata: With parts of Tripura in the throes of violence as the state transitions from a 25-year-long allegiance to the Left to embracing the Right, prohibitory orders were clamped in several areas of West Tripura district on Tuesday following reports of sporadic violence and clashes between rival political groups in different parts of the state.

On Monday, a five-foot-tall fibreglass statue of Russian Communist revolutionary Vladimir Lenin, that was unveiled by the CPI(M) politburo member Prakash Karat a few months back, was pulled down allegedly by BJP workers at College Square in Belonia, about 110 km from Agartala.

On Tuesday evening it was reported that another Lenin statue had been brought down in Sabroom, about 50 km from Belonia.

While the CPI(M) says the statues were pulled down by BJP supporters, the BJP denies this, saying it “does not practice the culture of violence”.

The CPI(M), however, accused the BJP and its alliance partner Indigenous People’s Front of Tripura (IPFT) of unleashing an “unprecedented reign of terror” throughout the state since the election results were announced on Saturday, and sought the immediate intervention of Prime Minister Narendra Modi in bringing the violence to an end before the situation “worsened”.

“After the election results were out, goons of the BJP have unleashed a reign of terror and all-round attacks on members and supporters of the CPI(M), their houses, party offices and mass organisation offices throughout the state,” said the memorandum which was submitted to Mr Modi in Parliament.

The party also handed over a list of the alleged violent incidents in Tripura to the Prime Minister.

In the recent Assembly elections, the BJP demolished the Left citadel in Tripura, winning a two-thirds majority with its ally IPFT.

On Tuesday, Tripura BJP chief Biplab Deb, 48, met governor Tathagata Roy and staked claim to forming the government. He is due to be sworn in as chief minister on March 9 with party colleague Jishnu Kumar Debbarma as his deputy. Prime Minister Narendra Modi, BJP president Amit Shah and the chief ministers of all BJP-ruled states will be invited to the swearing-in ceremony. While the police said the driver of the JCB excavator machine in Belonia was arrested and later released on bail, and a suo moto case has been filed in the second incident, the demolition of Lenin statues is likely to turn into an ideological war between the Left and the Right.

“Lenin is a foreigner and, in a way, a terrorist. There shouldn’t be a statue of this sort of person in our country. They are welcome to put that statue inside the Communist Party headquarters and worship it if they so wish,” BJP MP Subramanian Swamy told a TV channel.

In a tweet that he later deleted, senior BJP leader Ram Madhav said: “People taking down Lenin’s statue... not in Russia; it is in Tripura. ‘Chalo Paltai’.” The last two words are Bengali for “Let’s change”.

“Neither Karl Marx nor Lenin is my idol. But they are idols for some other parties and they have significance in countries such as Russia. So I cannot disregard them by demolishing their statues just as we cannot tolerate the demolition of the statues of Netaji or Swamiji,” she added.

She also lambasted the BJP for unleashing a reign of terror in Tripura. “In a democracy power changes hands. But that does not mean that you will torture your Opposition or demolish statues after capturing power,” she said.

Meanwhile, in New Delhi, Prime Minister Modi dubbed the BJP’s win over the Left in Tripura as an “ideological victory” that has changed the mood in the party, and asked its leaders to make the most of it in the coming months.