India   All India  07 Mar 2018  No special status but will give equivalent monetary benefit to Andhra: Jaitley
India, All India

No special status but will give equivalent monetary benefit to Andhra: Jaitley

Naidu earlier on Wednesday warned the Centre that it would not bode well if people's sentiments were ignored. 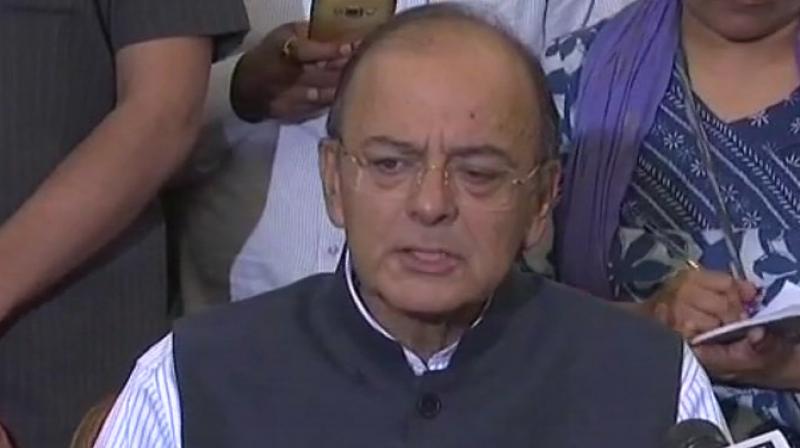 Asserting that the Center had kept its promise to AP, Jaitley said the provision for revenue deficit in case of Andhra Pradesh as per the Finance Commission was already made. (Photo: ANI/Twitter)

New Delhi: Hours after Andhra Pradesh Chief Minister N Chandrababu Naidu hinted at breaking ties with BJP, Union Minister Arun Jaitley on Wednesday said that sentiment does not decide quantum of funds, even as he asserted that the Centre was ready to give it.

"Political issues cannot increase quantum of money because Centre does not have free floating funds. Every state in India has a right to same Central funds in the same manner. I have been sympathetic to AP because I know it suffered due to bifurcation," he said.

Naidu had earlier on Wednesday lashed out at the Centre saying it was "insulting the sentiments" of the people of the state by not honouring the promises made in the AP Reorganisation Act, 2014, and also in Parliament.

Explaining the implication of special status, Jaitley said, "The special status used to be originally granted to states in the North-East because they have their own resources that were inadequate".

Asserting that the Center had kept its promise to AP, Jaitley said the provision for revenue deficit in case of Andhra Pradesh as per the Finance Commission was already made.

"Revenue deficit is for only 10 months period. Tax concessions were already given in the first two years," he said.

Jaitley said the Centre was committed to offer the monetary equivalent of special status to the state, which will be presented as a 'special package.'

"The Centre stands committed to satisfy every condition. Only variation is that after the 14th Finance Commission report, instead of formally calling it a Special Category state, we are calling it a special package, which gives the same monetary benefits that a special category state gives you," Jaitley told reporters.

Speaking on the reason for the promise being made to AP, Jaitley said Andhra Pradesh was unwilling for bifurcation where as Telangana wanted it. "Andhra was suffering in terms of resources", he said, "And therefore some help had to be given to AP," he added.

He further said that according to the 14th Finance Commission, there is no special category status now to be given.

The Telugu Desam Party chief Naidu earlier on Wednesday warned the Centre that it would not bode well if people's sentiments were ignored.

Naidu expressed displeasure over reports that the Centre was not ready to concede the state's demands, particularly the grant of special category status and bridging the revenue deficit (for 2014-15 fiscal).