PM Modi spoke to Home Minister Rajnath Singh who has ordered states to take strong action to check such incidents. 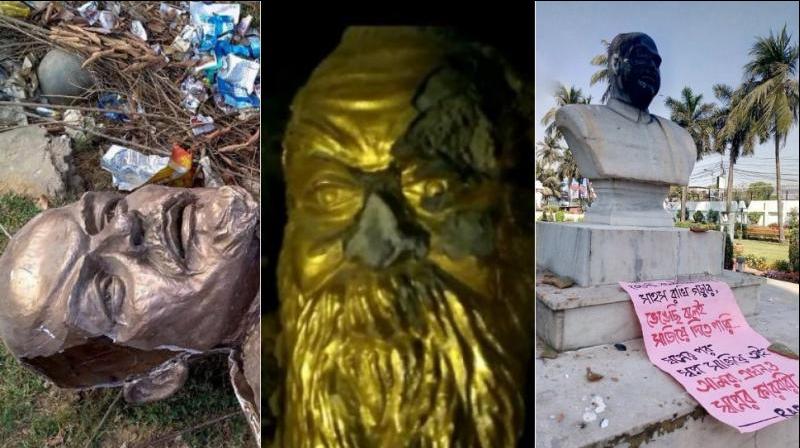 Mumbai: Prime Minister Narendra Modi has expressed his strong disapproval after the vandalism of statues in Tripura and Tamil Nadu. According to a government statement, the Prime Minister spoke to Union Home Minister Rajnath Singh who has ordered states to take strong action to check such incidents.

On Tuesday night, a statue of Dravidian icon and social reformer EVR Ramasamy, popularly known as Periyar, was vandalised in Tamil Nadu's Vellore. The incident came hours after BJP leader H Raja suggested it in his Facebook post responding to anger over a statue of Russian communist leader Vladimir Lenin being pulled down in Tripura.

On Wednesday morning, a bust of BJP icon Syama Prasad Mookerjee was blackened and its features smashed with a hammer in Kolkata’s Keoratola crematorium. The location is not far from Chief Minister Mamata Banerjee's residence.

Syama Prasad Mookerjee was the founder of the BJP's predecessor Jana Sangh.

A hand-written message placed under Syama Prasad Mookerjee's statue which was defaced roughly read: "...We have the strength to recreate, We know we can redesign because we have broken/ Since we have created dreams after dreams, we now are businessmen of dreams."

Kolkata police detained five supporters of a Left-wing group called Radical for the alleged vandalism. Photos from Kolkata showed a part of the bust's damaged as though it had been hit by stones.

The chain of vandalism started after statues of Lenin were demolished in Tripura on Monday evening, allegedly by workers of the BJP, which have defeated the 25-year-long rule of the Left in the northeastern state in the recent assembly election. The results of the polls were announced on Saturday.

Responding to the outrage over the Lenin statues being razed, BJP leader H Raja declared that Periyar statues in Tamil Nadu could be next.

"Who is Lenin and what is the connection between Lenin and India? What connection has India with Communists? Lenin's statue has been removed in Tripura. Today it is Lenin's statue in Tripura, tomorrow it will be the statue of caste fanatic EVR Ramasamy," said the post, which the BJP leader deleted and later disowned after a huge backlash in Tamil Nadu.

According to reports, H Raja "expressed regret" for his post and said, "Vandalising Periyar statues unacceptable. Facebook administration had posted that message without my permission. My intention was not to hurt anyone."

Two men, who were in inebriated condition, have been arrested for vandalising the statue at a municipal corporation office in Vellore.

"One man is a BJP member and another CPI worker, both drunk," the police said.