In an affidavit filed on Wednesday, the NIA denied that the agency behaved with her with prejudice as if she is a criminal. 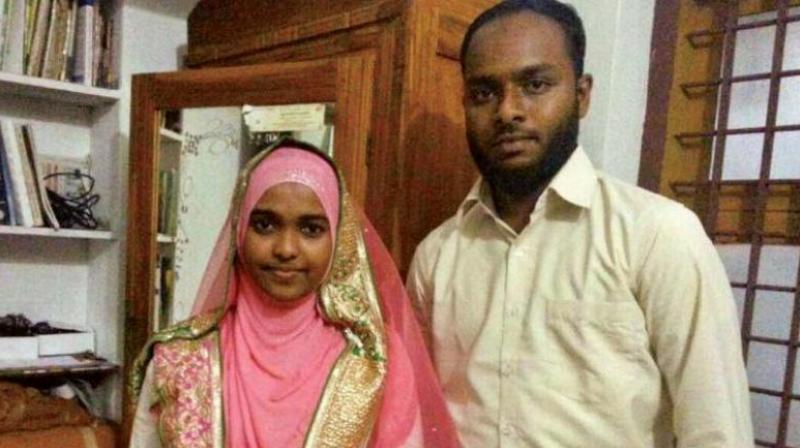 The NIA rejected Hadiya’s charge that the agency had created a story (of love jihad’ and forced conversions to Islam) and were trying to establish it without any proof. (Photo: File)

New Delhi: The National Investigation Agency (NIA) on Wednesday has denied in the Supreme Court the allegation of Akhila alias Hadiya, involved in Kerala’s love jihad that she was misled to portray her husband Shafin Jahan as a terrorist and also of treating her as a criminal.

In an affidavit filed on Wednesday, the NIA denied that the agency behaved with her with a prejudice as if she is a criminal or a terrorist. The allegation was baseless as the NIA was conducting investigation in a fair and objective manner based upon evidence and material collected so far.

It also said that the allegation that Shafin Jahan was portrayed as a terrorist was incorrect and it had carried out the probe under directions of the apex court and whatever it had stated reflected in the status report filed by the agency.

Regarding the probe, NIA said it had almost completed the investigation except examination of two individuals, Fasal Musthafa and Shirin Shahand, who are material and crucial witnesses in the case.

It has been learnt that these two witnesses are presently in Yemen and they had left India even the probe was started. Look out circulars had been issued to apprehend them if they visit the country.

The NIA rejected Hadiya’s charge that the agency had created a story (of love jihad’ and forced conversions to Islam) and were trying to establish it without any proof.

The NIA said such a charge is totally baseless and incorrect. There was no question of NIA treating Hadiya as a criminal or a terrorist and it would complete the investigation at the earliest in accordance with law.

The NIA wanted the court to take into consideration the outcome of the report before passing any order.

Hadiya had asserted that she converted to Islam out of own volition and married Shafin Jahan and pleaded to allow her to live with her husband.

The apex court in November 2017 has set Hadiya at liberty and allowed her to pursue her studies at the Sivaraj Homoeopathic Medical College in Salem, Tamil Nadu.

She reiterated that she was a Muslim and she wanted to continue to live as a Muslim.

She said, “Since August 22, 2016, except the period from September 27, 2016 to December 20, I have been under confinement without the freedom that I am entitled to. Even now I am under police surveillance. I most humbly pray that my entire liberty may kindly be restored to me.”

She said Shafin Jahan, is her husband and she wanted to continue to live as his wife. “I embraced the faith/religion of Islam on my choice as per my conscience and on my own free will, after studying about Islam and thereafter I married Shafin Jahan. I further pray that this Court may be kind enough to appoint my husband as guardian.”

The further hearing of the case will be held on March 9.