According to bariatric surgeon Dr Muffazal Lakdawala, who treated him, “Jogawat is fine and recovering well post his surgery.” 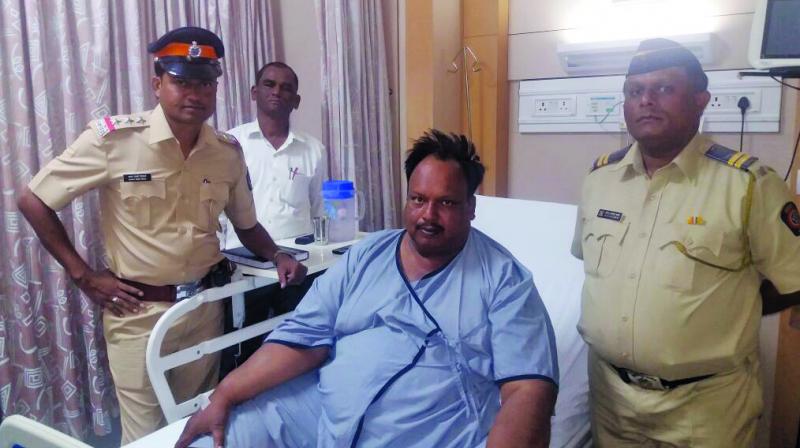 Mumbai: Madhya Pradesh Police’s inspector Daulataram Jogawat (58), who has been in the news recently for his weight problem, was discharged from the privately-run Saifee Hospital on Monday. Jogawat, who weighed 180 kg at the time of his admission to the hospital 10 days ago, lost three kilograms after successful bariatric surgery last Thursday.

“I am feeling light, after the bariatric surgery, as I have lost 3 kg,” Mr Jogawat told The Asian Age.

Jogawat has been prescribed a more healthy diet, which includes leafy vegetables, fruits and fibre-based food. After the surgery, he will be on protein shakes and other healthy food. He has been advised to follow the right food habits.

Jogawat said he would urge his department colleagues to maintain the right bodyweight with proper diet and regular exercises.

Shobha De, a prominent socialite, had poked fun at Mr Jogawat’s obesity recently after which the hospital came forward to treat him.

Jogawat said, “Nobody likes to be fat, I don’t know what went wrong with my body. Because of my obesity, I have suffered a couple of disorders and I take a vow to spread awareness about obesity.”

“Especially people working in department of police do not get sufficient time to work out, or eat the right prescribed healthy diet, so I will urge people to eat healthy and exercise regularly,” he said.

Dr Lakdawala said, “Within one and a half years Mr Jogawat will weigh only 80 kgs. He is following a strict prescribed diet. He is on liquid diet currently and will be losing more weight.”

Dr Lakdawala said, “His blood pressure, diabetes and sleep apnea will vanish after this surgery. Today he has been discharged and his kids are happy for new life granted to their dad.”

Jogawat also mentioned his thanks to the media.

The surgery was done at zero cost by Dr Lakdawala. However, the hospital rent, which comes to around `8 to `10 lakh, is being funded by the Madhya Pradesh police’s welfare fund.