Kerala budget booklet has a cover picture of Gandhi’s assassination 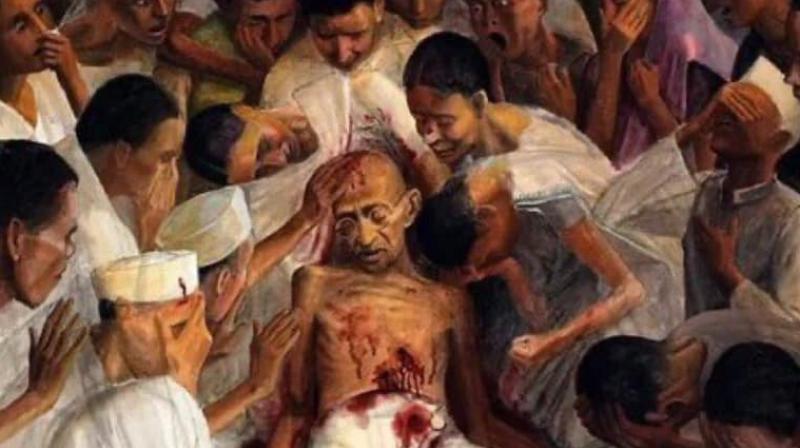 Thiruvananthapuram: The remarkable thing about Kerala’s annual budget, presented in the Assembly by finance minister T M Thomas Isaac on Friday, was that the booklet featured a cover picture of the assassination of Mahatma Gandhi.

It shows a mortally wounded Gandhi fallen to the ground and surrounded by anxious people. It’s a painting titled ‘Gandhi Himsa’ by Tom Vattakuzhi. It had gone viral on social media when it was released by the painter earlier.

Use of the picture to wrap the state’s budget signaled the content of Thomas Isaac’s budget speech. It was as much a political statement as a readout of welfare allocations.

“This is important at a time when history is being re-written,” Isaac told ANI. “An attempt is being made to erase some popular memories.”

The finance minister proceeded to preface his speech with a pointed attack on the Citizenship Amendment Act (CAA) brought in by the Union Government and went on to highlight the measly devolution of funds to the state from the Centre.

Isaac said the current nationwide protests against the citizenship law are the biggest protests seen since Independence, and quoted a poem titled 'Fear' by a 15-year old boy from Wayanad, Dhruvath Gautham, who wrote 'fear is country and silence is an ornament!'

Isaac said, "Even the imagination of our children is now filled with fear."

He came down heavily on the BJP-led NDA government at the Centre, which he described as a communalised government machinery whose leaders who talk only in terms of hatred.

As for budgetary matters, the finance minister said the central government was trying to strangulate the state by reducing devolution of taxes to Kerala from from Rs.17,872 crore in 2019-20 to Rs.15,236 crore in 2020-2021.

Isaac said funding accruals to Kerala on various accounts would amount to Rs 8330 crore, which he proposed to make up through revenue augmentation measures such as a hike in building tax.

The thrust of the Isaac’s budget went to basic issues like women safety, affordable food and housing, drinking water, basic infrastructure and environment conservation. A major allocation of Rs.6000 has been made for development projects in Kochi, the fastest growing city in the state, such as extension of the metro.