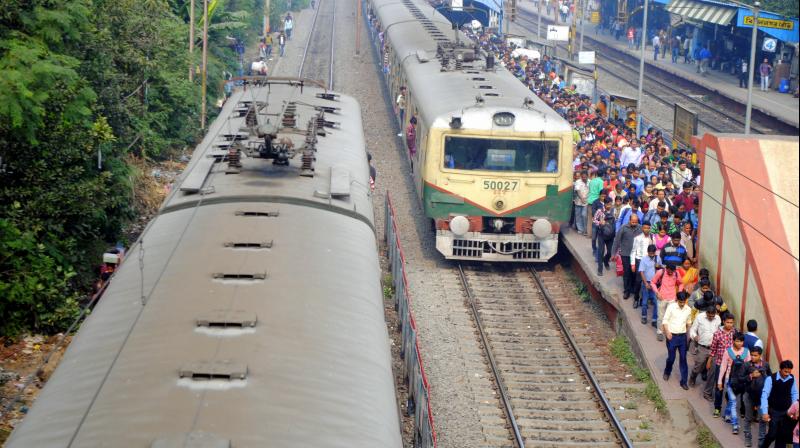 Kolkata: The Union budget for fiscal 2018-19 has proposed electrification of 881 km of rail network in West Bengal at a proposed cost of Rs 771.54 crore, a senior railway official said in Kolkata on Wednesday.

The project will be undertaken in seven zones of West Bengal, under the jurisdiction of Kolkata-based Eastern Railway, South Eastern Railway (SER) and Maligaon-based North Frontier Railway (NFR), he said.

The electrification work, under NFR jurisdiction, will mostly cover railroads in north Bengal districts of Jalpaiguri, Coochbehar and Alipurduar and also some parts of western Assam bordering West Bengal, the official said.

A total of 506 km has been earmarked for this project, under NFR zone, at an estimated cost of Rs 475.31 crore. Of that 412 km comes within the perimeters of West Bengal, the official said.

"The electrification work for Balurghat-Eklakhi line in South Dinajpur and Malda districts of the state will be carried out alongside Katihar-Tejnarayanpur and Barsoi-Radhikapur routes with 142 km of the 176-km-long project falling within West Bengal. The rest is in Bihar," he said, adding that the electrification of the West Bengal part of this route involves a cost of Rs 124.95 crore.

The 34-km Raninagar-Haldibari single line in north Bengal will be electrified at a cost of Rs 27.71 crore.

Under the jurisdiction of South Eastern Railway, a 118 km stretch of Bankura-Mashagram rail link will will see electrification work at a proposed cost of Rs 92.8 crore, the official noted.

The 52-km-long Katwa-Ahmedpur line in Burdwan and Birbhum districts, within Eastern Railway jurisdiction, will be electrified at an estimated cost of Rs 53.66 crore, he said.

Apart from the rail routes, the project has also earmarked 181-km-long rail link in the yards and loop lines, within SER jurisdiction, for electrification.