The Prime Minister said the President's address highlighted work being done across the country and how India is progressing. 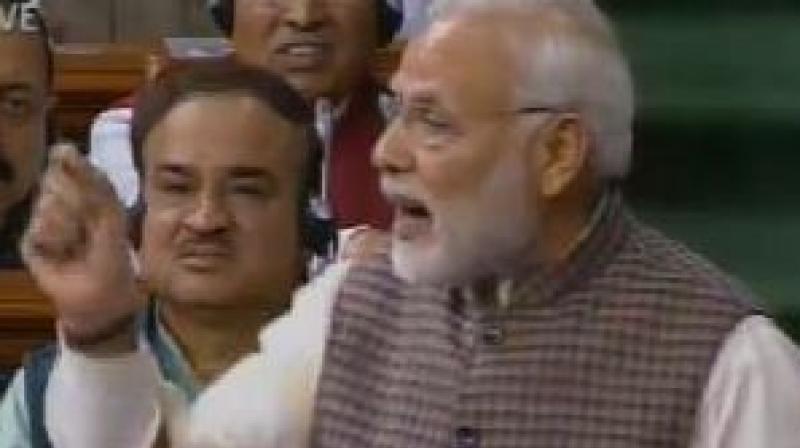 New Delhi: Delivering Motion of Thanks to the President's address at the start of the Budget session 2018, Prime Minister Narendra Modi on Wednesday said President Ram Nath Kovind's address highlighted the work being done across the country and how India is progressing.

The Prime Minister said Partition was result of Congress' wrong policies. "Not a single day has passed when country has not suffered due to poision sowed by you," Modi said in Lok Sabha.

Modi also said the people of Telangana were suffering for the hurried division of Andhra Pradesh by Congress, which took only politics into consideration during the deed.

"Under Atal Bihari Vajpayee's government too states were divided, but they were done with everyone's confidence... the process was smooth... But the Congress has messed up in dividing Andhra Pradesh. They did it in a hurry, and without much thought," said Modi.

"When we speak about creating new states, we remember the manner in which Atal Bihari Vajpayee ji created Uttarakhand, Jharkhand and Chhattisgarh. He showed how farsighted decision making is done," the Prime Minister said.

Intensifying his attack at the Opposition, Modi said, "Don't give sermons on democracy to us, we know what you have done in the past."

The Prime Minister said even after 70 years of Independence, 125 crore Indians have to suffer every single day for the sins that the Congress committed.

"I wish the opposition had the courage to listen to silently," the Prime Minister said.

About the constant disruption of Parliament session by the Opposition, Modi said, "Opposition has the right to protest but not disrupt."

The Prime Minister said, "I see that whenever we are criticised by select opposition parties, substance is lacking. They go back to saying; 'when we were in power...' This is the same party that divided India."

Narendra Modi said India did not get democracy due to Pandit Nehru, as Congress wants people to believe. "Please look at our rich history. There are many examples of rich democratic traditions that date back centuries ago. Democracy is integral to this nation and is in our culture," PM said.

Modi said if Sardar Vallabhbhai Patel had been the first Prime Minister, a part of Kashmir would not have been under control of Pakistan.

The Prime Minister said: "We cannot forget how the Congress insulted Neelam Sanjiva Reddy, a proud son of Andhra Pradesh. They humiliated him. Nobody in India needs lessons on democracy from the Congress Party."

Strengthening his attack on Congress, Modi said, "How did the Congress act in Kerala, how did they treat the Akali Dal in Punjab, how did they behave in Tamil Nadu? Why did Congress dismiss so many state governments at their will. This is no commitment to democracy."

Recalling former Prime Minister Rajiv Gandhi's behaviour towards Congress leader T Anjaiah, Modi said, "When Rajiv Gandhi landed in Hyderabad, how did he behave with a T Anjaiah. He humiliated a big leader, who did not belong to a privileged background."

"After independence, right from the start, if you (Congress) had worked sincerely and honestly for the people of the country, India would have been miles ahead of where it is today. But all you were interested in was to promote one person and his family," said the Prime Minister.

Prime Minister Narendra Modi said, what started from Independence has now become the only thing that Congress does - defend one family.

"After independence, right from the start, if you (Congress) had worked sincerely and honestly for the people of the country, India would have been miles ahead of where it is today. But all you were interested in was to promote one person and his family," said the Prime Minister.

Prime Minister Narendra Modi in his Lok Sabha speech said, "When we compare the work done in three years of the NDA government to that done by the Congress in the past, when we compare the facts, figures and numbers... well, what comparison are we even talking about...there is none. The Congress has failed the people miserably, so let me give you the numbers."

Modi pointed out that more villages are getting optical fibre network in the last three years than they got under all Congress-led governments. "Just look at the transformation that's happening now," the PM said.

About the accusation made by Congress leader Mallikarjun Kharge about Railways and Karnakataka, the Prime Minister said: "Since (Mallikarjun) Kharge Ji spoke about railways and Karnataka, let me tell the truth about the Bidar-Kalburgi rail line. The project was approved by the Vajpayee Government and from 2004 till 2013 nothing was done. It is when a Government under BS Yeddyurappa gave approvals that work could begin."

Modi said the approvals by the former government in Karnataka led by BJP's Yeddyurappa helped progress the work on the rail line. "We do not bother who is the local MP or MLA, which party they belong to. We serve the nation and care for 125 crore Indians," said Modi.

Listing the achievements of his government and mocking at the Congress in the Lok Sabha the Prime Minister said, "I know it pains you to hear all this, but the people of this nation already gave you a bitter pill to swallow few years ago. Many of you have still not come to terms with it, but hear some more..."

Modi said, "The way people of Rajasthan were misled about the Barmer refinery was appalling. Just for votes, lies were said. It is in the last three years that the Government of India and the Rajasthan Government worked together to sort out the pending issues."

The Prime Minister asked the Opposition to stop misleading the country by false statements on jobs and employment. "The truth is quite the opposite," Modi added.

Talking about the start-up initiative by the Centre, Modi said, "I can see the energy and enthusiasm in our youth. They want to do something on their own, they want to launch their own start-ups. Our government is giving wings to the aspirations of India's middle class."

Narendra Modi said the impact of Start-up India, Mudra Yojana, Entrepreneurship scheme, Skill India, and Make in India reveal that the truth is far from what the Congress believes and says.

Modi said, "Our government had the opportunity to prepare an aviation policy that focuses on smaller cities, towns so that more Indians can fly. Today, tier-2 and tier-3 towns in India are getting air connectivity. Almost a thousand new aircraft have been ordered. So, who is doing the work."

Talking about Aadhaar, the Prime Minister said, "When our Government took office in 2014, the chorus from the opposition was - Modi will scrap Aadhaar, but when we made Aadhaar more effective in terms of enabling better and effective service delivery, suddenly the opposition began opposing Aadhaar."

Modi said, "Congress just doesn't know how to deal with all the work they see being done. When the GST happened, and they saw its success, they didn't know how to react, so they made a joke of it."

Modi in his Lok Sabha speech said, "I know the Government's efforts to eliminate corruption and black money are hurting a select group of people. Today, people who served as Chief Ministers are in jail. However powerful one was, if one has been corrupt, that person will be punished. We are in an era of honesty."

Modi blamed the Congress for failure of country's non-performing assets. He said, "It was for the nations benefit that I was silent when you kept saying whatever you wanted. I worked silently for the benefit of the nation... but the time has come for the people to know the truth. Of how the Congress had completely ruined the nation. I stand here to in the Parliament - the temple of democracy - and say on record that the entire failure and the entire problem of India's NPAs are because of you. Since we have come to power not a single such case has happened."

Targetting Congress in his speech Modi said, "Loans were given without any scrutiny, they were distributed like sweets. Your bad decisions have directly been the reason for failures."

Modi said, "I have all the proof of how the Congress has looted and plundered India. You will pay for your sins. Time has come for you to be held accountable and answerable to the people of India."

Indirectly attacking at Congress president Rahul Gandhi, the Prime Minister said, "The nation's Army was standing ground in Doklam but leaders of one party preferred to meet Chinese officials. The same party questions the Army on surgical strikes. It was a time when the government, the opposition and all parties should've stood together."

"I reiterate to those in the Congress that to achieve big things, you need to be have a big heart. My appeal to all of you present here (in Lok Sabha) is that we have to create a new India. Let us work together to fulfil the dreams of the people," the PM said.

The house adopted the motion of thanks to the President's address. Lok Sabha was adjourned till 3 pm.