Oppn leader Azad asked why Jutt, a Pakistani arrested in 2014, was brought to a civilian hospital and not taken to the army hospital. 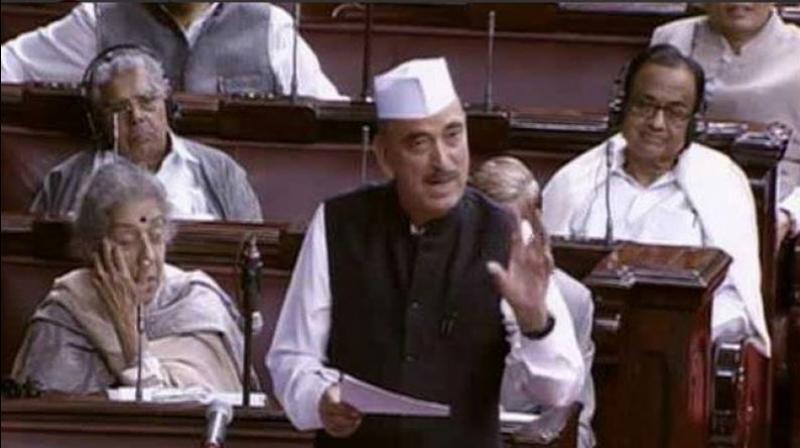 'Though the government is claiming that situation in the state is better than the past decade, the ground reality is different,' opposition leader Ghulam Nabi Azad said. (Photo: ANI/Twitter)

New Delhi: The issue of the daring escape of an arrested Lashkar-e-Taiba (LeT) militant from a Srinagar hospital was raised in the Rajya Sabha on Wednesday, with the Congress saying the situation in Jammu and Kashmir has worsened.

Raising the issue during the Zero Hour, Leader of Opposition and senior Congress leader Ghulam Nabi Azad said the situation, not just in Srinagar, but also in the Jammu province has worsened.

Though the government is claiming that situation in the state is better than the past decade, the ground reality is different, he said.

On Tuesday, 22-year-old Mohammed Naveed Jhutt alias Abu Hunzala escaped from the custody of jail officials after his associates opened fire on his escorts, when he was brought to Shri Maharaja Hari Singh Hospital in Srinagar for a check-up.

Azad also asked why Jutt, a Pakistani who was arrested in 2014, was brought to a civilian hospital and not taken to the army hospital.

The incident, he said, does not reflect well on the state government, the Centre and the country. "The Government should be vigilant so that such situations are not repeated," he said.

Azad sought a discussion on the worsening security situation in Jammu and Kashmir in the current or the next session of Parliament.

Vivek K Tankha (Cong) said a dialogue should be started to create an atmosphere to faciliate the return of Kashmiri Pandits to the Valley.