Rahul questioned Modi’s silence on Rafale deal, farmers' plight and job opportunities for youth in his over one-hour speech. 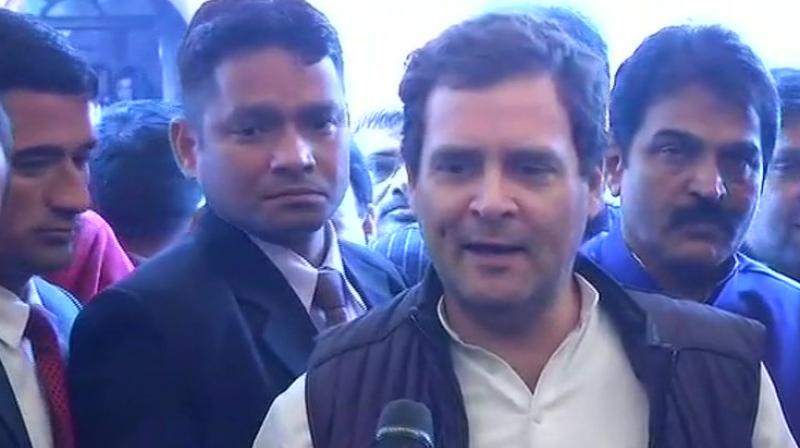 Rahul Gandhi also targeted Defence Minister Nirmala Sitharaman for her remarks that the details on Rafale Deal cannot be disclosed since it is classified. (Photo: ANI/Twitter)

New Delhi: Reacting to the Prime Minister's motion of thanks speech in Lok Sabha, Congress president Rahul Gandhi on Wednesday questioned Modi’s silence on Rafale deal, plight of farmers and employment opportunities for youth in his over one-hour speech.

“He spoke for more than 1 hour but didn't speak a word on Rafale deal, or on farmers or on employment for youth. It was a totally political speech,” Rahul said.

He further criticised the Prime Minister for accusing the Opposition and not answering the public’s questions.

Rahul said, “I think Modiji has forgotten that he is the PM now, he should answer questions and not always accuse the Opposition.”

The Congress president also targeted Defence Minister Nirmala Sitharaman for her remarks that the details on Rafale Deal cannot be disclosed since it is classified.

“PM might be a terrific orator but this speech is a farrago of misrepresentations and half truth,” Tharoor said.

Shiv Sena, a long-time ally of ruling BJP, also asked Modi to talk about government’s policies in Parliament and not criticise the Congress party.

“It is time that Modi ji realises it has been 4 years now. People were fed up because of Congress and that is why they chose you. People want to hear your schemes and not criticism of Congress,” Shiv Sena leader Manisha Kayande said.

Opposition MPs, including from Congress, staged walk out of Lok Sabha while the Prime Minister was delivering his speech in the house. The Opposition MPs also said that Modi’s speech had no mention of the Andhra Reorganisation Act.