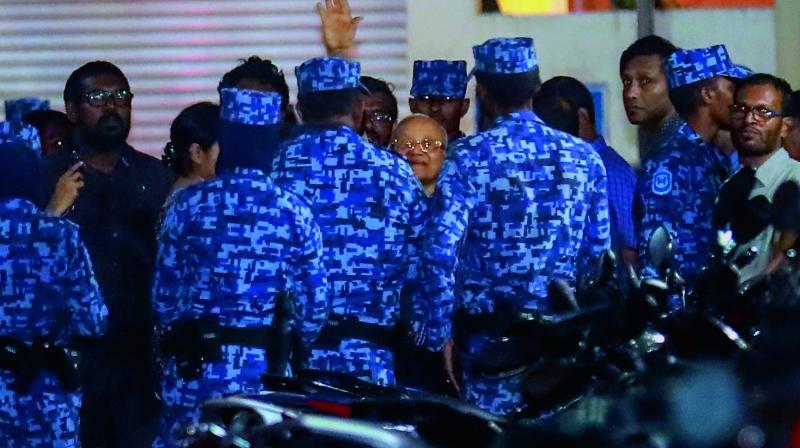 New Delhi: With the Maldives in turmoil and its exiled President Mohamed Nasheed appealing directly to India for military and diplomatic intervention to help release political prisoners and restore order, defence sources said India is keeping troops in readiness to fly overseas at short notice if the situation warranted.

A sizeable number of troops belonging to the Special Forces, sources said, were being mobilised and asked to be ready to fly overseas at short notice from an airbase in south India even as C-17 and C-130J aircraft are being kept ready as part of standard operating procedures in such situations.

While Army Chief General Bipin Rawat was away on a one-day scheduled visit to Bhutan, the top military brass from the Army, Navy and Air Force were in a meeting till late evening on Tuesday in South Block which houses the defence ministry.

The soldiers were dispatched at the behest of President Abdulla Yameen, who had just declared a 15-day nationwide State of Emergency granting law enforcement sweeping powers and suspending parts of the Constitution. The move came a week after the Maldivian Supreme Court overturned criminal convictions against nine of the President’s opponents and ordered him to free those in jail.

On Tuesday morning, Mohamed Nasheed, the exiled President of the Maldives, tweeted, “On behalf of Maldivian people we humbly request: ?1. India to send envoy, backed by its military, to release judges & pol. detainees inc. Prez. Gayoom. We request a physical presence. 2. The US to stop all financial transactions of Maldives regime leaders going through US banks.”

While Indian forces may be in a state of readiness, it is the country’s political leadership that will take a call on military intervention as it will not just underscore India’s geo-strategic aspirations, but may also be another battleground where a face-off with China is likely.

China has, since 2011, been expanding its interests in the Maldives which occupies a strategic location in the Indian Ocean.

But were India to intervene in the Maldives militarily, it would not be unprecedented.

A band of armed militants of the People’s Liberation Organisation (PLOTE) from Sri Lanka had seized control over vital installations in the Maldives in November 1988. However, they were unable to lay their hands on President Maumoon Abdul Gayoom who cleverly shifted his hiding bases for hours and requested the then Indian government of PM Rajiv Gandhi for immediate military help. On the night of November 3, 1988, Rajiv Gandhi dispatched 1,600 soldiers and it took them just a few hours to restore order and reinstall the Gayoom government.

This time around too India has been keeping a sharp eye on developments in the Maldives.

Early on Tuesday, clearly articulating its anger to the Maldives after New Delhi’s advice was ignored, India said it was “disturbed” over the Maldivian government’s refusal to abide by the Supreme Court’s verdict on release of Opposition leaders as well as the suspension of constitutional rights.

In a statement, the MEA said, “We are disturbed by the declaration of a state of Emergency in the Maldives following the refusal of the Government to abide by the unanimous ruling of the full bench of the Supreme Court on 1 February, and also by the suspension of Constitutional rights of the people of Maldives. The  arrest of the Supreme Court Chief Justice and political figures are also reasons for concern. The government continues to carefully monitor the situation.”

In a televised address to the nation on Tuesday, President Yameen, perceived as being very close to China, accused the judges of being part of a plot to overthrow him.
“I had to declare a national emergency because there was no other way to investigate these judges… We had to find out how thick the plot or coup was.”

The Opposition has called the arrest of former President Gayoom, the Chief Justice and others a “purge”.

There has also been international condemnation of the government’s moves, with the US expressing concern.