A woman student of Bharti College, filed a complaint to DU VC Yogesh Tyagi, alleging sexual harassment by a male teacher of the college. 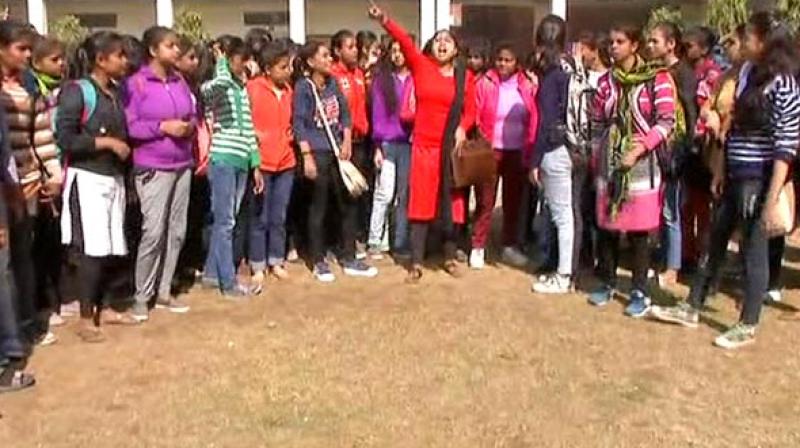 The student alleged that the professor used to send her lewd messages and would make obscene calls to her until she confronted him and recorded the incident. (Photo: ANI)

New Delhi: Students of a Delhi University college on Wednesday staged a protest on the campus against the college authorities over the alleged harassment of a third-year student by a professor.

A woman student of Bharti College, reportedly filed a complaint to Vice-Chancellor of the University, Yogesh Tyagi, alleging sexual harassment by a male teacher of the college.

The student alleged that the professor used to send her lewd messages and would make obscene calls to her until she confronted him and recorded the incident.

Reflecting on the matter, Sangeeta, student leader of Bharti College said, "Our Prime Minister always talks about women safety and welfare. On the other side, our teachers misbehave with us. This is not a one-off incident; there are many other girls who are facing this."

The protestors also alleged that the college on the contrary suspended the victim for a period of three years in a cheating case, a charge that the institution denies.

Mukti Sanyal, the principal of the college, said, "I have no idea about any action taken against the victim and there was no rustication either; without my signature rustication cannot happen and we have sent the teacher on extraordinary leave. So we are waiting for the investigation to take place and though he has not deposed in front of the committee yet which he will do I think and he will also be called to the committee to say his part of the story. Before leaving he hinted that there is a conspiracy against him."

Sanyal added that the classes are going on without any disruption, along with other curricular activities.