Act before it’s too late: Goonda raj on the rise, must be kept in check

The Rajputs will benefit hugely if the status is granted. But this status is not an easy dole to give. 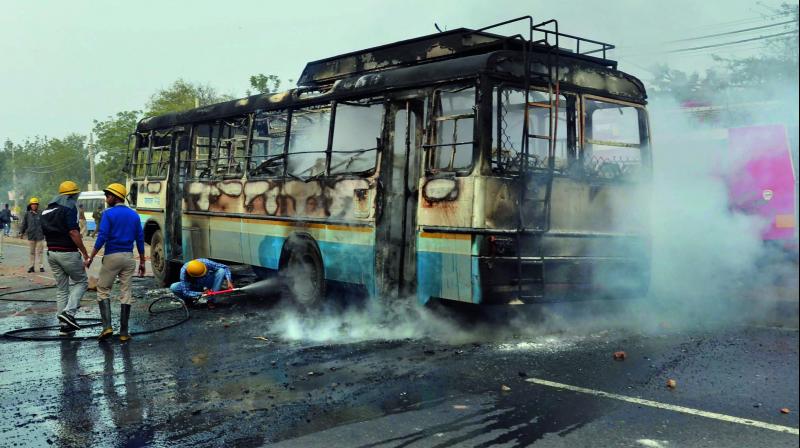 Firefighters try to douse a fire after alleged activists of the Karni Sena torched a Haryana Roadways bus at NH-248 during a demonstration against the release of Padmaavat in Gurgaon recently. (Photo: PTI)

Allow me to draw this comparison. Steve Bannon, until recently White House chief strategist and chairman of Breitbart News, the organ of the Alt-right, the white supremacist group that he headed, and Paul Manafort, lawyer and Mr Trump’s campaign manager, are both out on their backsides now after being thrown out of Team Trump. But before they became hot potatoes for Mr Trump, their white supremacist outfit Alt-right had grown manifold.

Before Mr Trump took Steve Bannon on his team, Alt-right had a weekly visitor footfall of perhaps a few hundred. Overnight, its footfall became a couple of million a week, increasing exponentially. Funding began pouring in. Millions of dollars were amassed. Why? Because of the promise of state patronage. People saw that Mr Trump, presidential candidate, was associating with the people behind Alt-right. It didn’t matter that it was a rabid organisation that is exceptionally racist.

The BJP has had problems with the Rajputs. They have been asking for Scheduled Caste status, just like the Meenas. The Rajputs will benefit hugely if the status is granted. But this status is not an easy dole to give.

The BJP government in Rajasthan is on its last legs. This is common knowledge. You only have to sit in on one conversation to know how corrupt the government is. What would it not do to win the support of a large community in the hope that it could ride on its shoulders to electoral victory? It would do anything. And it did.

The BJP government in Rajasthan stood shoulder to shoulder with the Karni Sena. Voluntary banning of the film by the government, not coming down heavily on the goons who have been taking the law into their own hands is all part of a deep-rooted strategy. Vasundhra Raje looked as if she was blind and deaf and certainly mute as there wasn’t a peep out of her denouncing and disapproving of the violence perpetrated by this Karni Sena, not only in Rajasthan but in many other parts of the country. Now, perhaps, the BJP is hoping that it will get the Rajput vote in its kitty.

Look at the BJP government in Madhya Pradesh. Again, it is widely felt that it is going to be thrown out of power. The people of the state are fed up of the corruption and abject lack of governance. How proactive has this government been in tackling the crisis perpetrated by the Sanjay Leela Bhansali film is something we have all seen. The state was probably the first to ban the film from being screened by a government diktat.

Asked if the film would be banned in Madhya Pradesh, chief minister Shivraj Singh Chouhan, fresh after a discussion on Surya Namaskar and Pranayam, said: “Jo kaha tha, wo hoga (What I had said... will happen).”

The film, as we know, had got clearance from the CBFC after the change of title and modifications in the script.

Last, but not least, why forget the Haryana government — which has also lost the trust of the people? Each of these governments is on its way out.  They have been clutching at straws in the wind, and Sanjay Leela Bhansali gave them the Karni Sena. Chief minister Manohar Lal Khattar too banned the film along with the other BJP-run states, desperate to garner the Rajput vote.

So with such heavyweights behind them, the Karni Sena goons ran amuck. They threatened to lop off noses, to burn theatres and stopped traffic. I heard one of them even address a television anchor as “baby”.

None of these governments looked at this theatre of the absurd playing out in their states. They looked away. The Karni Sena suddenly became powerful. It took the law in its hands. Men sporting huge headgear and handlebar moustaches got TV prime time and started to think they lived in a “goonda raj” where they were the key goondas. After all, they had the patronage of the government.

The question is — how wrong are they? It is a goonda raj in some places — with people taking to the streets as if it’s a matter of life or death. But over a silly movie which no one had even seen? How can this be acceptable, and how can this be allowed?

Prime Minister Narendra Modi’s silence over the horrific incident of stone-pelting of a schoolbus in Gurgaon was stunning. The visuals of children cowering in fear, crouched on the floor of the bu,s will haunt us for a long time. To add insult to injury, the PM tweets about such an incident in another land far away, while ignoring this one. Is this not “goonda raj” — where everybody is settling all matters on the streets? We are breeding goondas. We are breeding “brown shirts”!

These are dangerous times, when we are treading very dangerous grounds.

Cut to Tamil Nadu. Some protests were held where the protesters held placards asking for the film to be banned. They did not break or burn things.

No political patronage makes for peaceful protests. The state government does not need them in its kitty. The film is showing peacefully. At the normal ticket prices. Not at the obnoxious rates in some Delhi theatres.

Who is the government patronising? And why are we voting for such a government? People who are reading this know well that the Karni Sena is not the first or the last of such organsations to be encouraged by the current government. Each day brings forth new stories about unpardonable excesses by BJP-sponsored goons all over. Much like how Donald Trump patronises the people who want a white America.

The time has come to set things right.