Since the incident nine officers, including three engineers, have been suspended for negligence and ten workers have died. 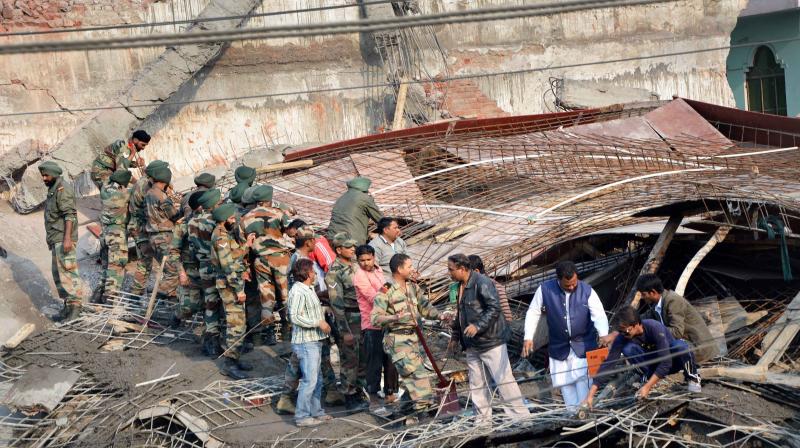 Army jawans carry out rescue and relief works after collapse of an under-construction building in Chakeri, Kanpur. (Photo: PTI)

Kanpur: The death toll in the under-construction building collapse in Kanpur climbed to 10 to Tuesday with the recovery of two bodies from the debris during the rescue operations which continued for the seventh day even as police failed to nab the accused including an SP leader who owned the structure.

"Bodies of two construction workers were recovered this morning during rescue operations being conducted by personnel from the district administration and the Kanpur Development Authority (KDA)," IG (Kanpur Range) Zaki Ahmad said.

Rescue operations will end tomorrow with the clearing of the debris, he said, adding the bodies have been sent for post mortem.

"A manhunt is underway to nab Mehtab Alam, the owner of the building, and the contractor," the IG said.

Meanwhile the KDA has launched a drive to identify and seal illegal building constructions in the city.

"The KDA has sealed around 20 under-construction buildings following the February 1 incident. A total of 150 such buildings were sealed last year," KDA vice-chairperson Jaishree Bhoj said.

Since the incident nine officers, including three engineers, have been suspended for negligence and ten workers have died.

Bhoj said two-member team probing the incident, in which top floors of the seven-storey under-construction building at KDA colony Jajmua collapsed, will submit its report soon.