'PM using a natural calamity, like earthquake, to make a political point shows the depths to which he will descend to,' Congress said. 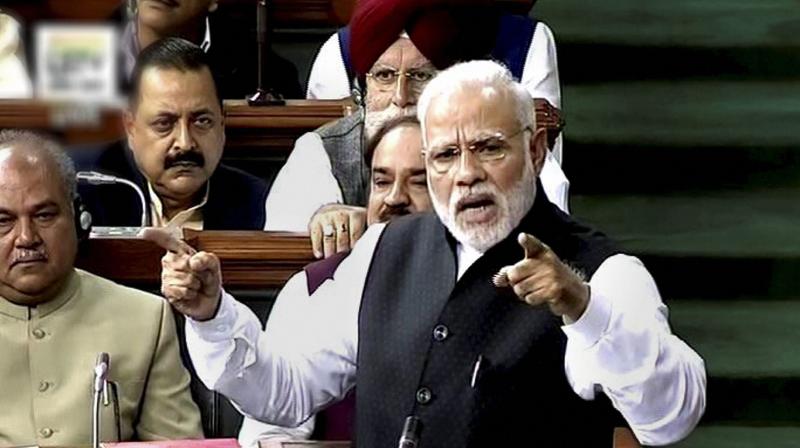 New Delhi: Prime Minister Narendra Modi took a jibe at Congress Vice President Rahul Gandhi in Parliament on Tuesday, mocking his remark two months ago that an earthquake would take place if he spoke on the note-ban issue in Parliament.

"Finally the earthquake came," Narendra Modi said in Parliament in a reference to last night's moderate quake in north India, with tremors felt in Delhi.

Just the day before, at two separate political rallies in poll-bound Uttar Pradesh, Rahul and Modi sparred over the acronym SCAM. Modi asked the state to get rid of SCAM in the next elections -- the Samajwadi Party, Congress, Akhilesh Yadav and Mayawati. Rahul retaliated and said he saw 'seva', 'courage', 'ability' and 'modesty' in SCAM.

"I was wondering why the earthquake came. When someone sees 'seva' or any positive virtue in the word 'SCAM', then mother earth would definitely be upset," Modi said.

Further cornering the Congress on the Emergency declared during the Indira Gandhi regime, the Prime Minister said: "We remember how democracy was under threat from 1975 to 1977, when Opposition leaders were jailed, newspaper freedom curtailed."

The SCAM sarcasm was not lost on the Congress. The Opposition party was quick to respond to Modi's attack on Rahul and tweeted that the Prime Minister was "using a natural calamity, like earthquake, to make a political point."

In December last year, Rahul had said he was not being allowed to speak in Parliament, and were he given a chance to put his point forward, it would cause an ‘earthquake’.

The Prime Minister als gave abefitting reply to Congress leader Mallikarjun Kharge who had told the ruling party rather harshly yesterday: “People such as Gandhiji, Indiraji sacrificed their lives for the country’s unity, who was there from your side? Not even a dog.”

The Prime Minister was present in the House yesterday when the former Railways minister rolled out this vitriol.

Modi replied on Tuesday: “Hum kutton wali parampara se pale bade nahin hain.” (We have not been brought up in a dog-like loyal tradiciton.)

He went on to add: “There are many like me who could not die for the nation but we live for and serve India.”