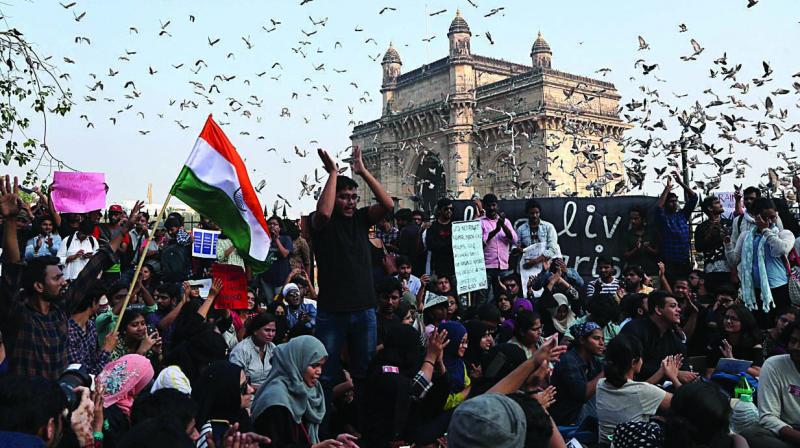 Pigeons fly near the Gateway of India as students participate in a protest against Sunday’s assault by masked assailants at New Delh’s Jawaharlal Nehru University in Mumbai on Monday. (Photo: AP)

New Delhi: Strong support from all quarters across the country and abroad poured in for students of Jawaharlal Nehru University (JNU) who were victims of a brutal attack by “masked” goons on Sunday evening. While students from colleges and universities across the country and in the UK and US held protest marches and took out rallies in support of JNU students, many political leaders and Bollywood stars too rallied behind the injured students, demanding strict action against the perpetrators and the sacking of the JNU vice-chancellor, M. Jagadesh Kumar.

Around 34 students and teachers from JNU, who were admitted to the AIIMS trauma centre on Sunday night following attacks by masked men in the campus, were discharged early on Monday.

Two senior wardens of JNU hostels — Periyar and Sabarmati — resigned on Monday on “moral grounds” for failing to protect students during the attack, while Shiv Sena leader and Maharashtra chief minister Uddhav Thackeray stirred the political caldron by equating the attack on JNU students to Mumbai’s 26/11 terror attacks.

Demanding an independent judicial inquiry into the shocking and brazen violence, Congress president Sonia Gandhi said, “The horrifying and unprecedented violence unleashed on India’s young by goons with active abetment of the ruling Modi government is deplorable and unacceptable. Everyday campuses and colleges are raided across India, either by the police or lumpen elements with support of the BJP government.”

Students of JNU, that has become a battleground of Left versus Right politics ever since the Bharatiya Janata Party came to power at the Centre, also reveived support from several other quarters. “I think any Indian who cares about the nation’s image in the world should worry. This has too many echoes of the years when Germany was moving towards Nazi rule,” said Nobel prize winner and JNU alumnus Abhijit Banerjee.

Pushed on the back foot over allegations that its student wing, Akhil Bharatiya Vidyarthi Parishad (ABVP), had planned and carried out the attack on students, the BJP, and the JNU administration tried to give a spin that the violence was a result of a “clash” between two factions of students and blamed students affiliated to the Left, led by Jawaharlal Nehru University Students Union (JNUSU) president Aishe Ghosh, for it.

However, throughout the day evidence on social media emerged indicating alleged role of the ABVP with screen-shots of “WhatsApp chats” indicating its hand in the “pre-planned” attack.

According to reports, when media organisations called the telephone numbers on the WhatsApp group, they got vague answers saying the numbers were being misused. However, NDTV claimed some people in the WhatsApp group accepted they were from ABVP and that they had indeed participated in the violence in JNU.

The ABVP on its part has denied its hand in the attack and instead blamed the Left students of violence and accused JNUSU leader of leading the mob of “masked” goons. The JNU administration too has tried to portray the matter as a “clash” between two groups of students, largely blaming the Left JNUSU for the ruckus in the campus.

But Ms Ghosh on Monday categorically accused the ABVP for the murderous attack on her, other students and professors saying among the attackers were a few ABVP students of JNU and some outsiders.

“Yesterday’s attack was an organised attack by goons of RSS and ABVP. Since past four-five days violence was being promoted in the campus by some RSS affiliated professors and ABVP… The answer to every iron rod used against the students will be replied to, through debate and discussion. JNU’s culture will not be eroded... JNU will uphold its democratic culture,” said Ms Ghosh.

Total of 34 people, including Prof. Sucharita Sen and Ms Ghosh, were injured in the attack on JNU students by masked men and women carrying iron rods, hammers and stones. The JNUSU president was hit with rods and hammers leading to roughly 15 stitches on her forehead. She also suffered a fracture in her left hand and other injuries.

Even though minor incidents have been taking place for the last couple of days in the campus where JNUSU is protesting fee hike and preventing allegedly “ABVP-backed” students from registering for the second semester, the shocking mob attack happened around 6.30 pm on Sunday when a “masked” group entered JNU campus from the back gate and left after beating and threatening students for almost 90 minutes according to some accounts. The masked group,  which included some girls, also allegedly molested girls.

Ms Ghosh claimed that she made a phone call to Delhi Police at around 6.30 pm Sunday, seeking protection and intervention. However, the police landed at around 8 pm after JNU administration made a PCR call at 7.45 pm. What is baffling is that despite JNU students and teachers crying for help, the Delhi Police was missing in action and it registered an FIR after more than 15 hours.

Much before 7 pm on Sunday, social media was abuzz with video clips of masked goons beating students and photographs of hurt students and professors, including Ms Ghose who was bleeding from the head and a photograph of Prof. Sucharita Sen in a wheelchair at AIIMS with her head bandaged. Twitter was also flooded with SOS messages from JNU students, alumni and concerned citizens expressing shock and asking people to rush to help the students who were trapped. The hashtags #JNUHorror and #SOSJNU were trending.

Delhi Police though has rejected charges of delay in response and said the police held a flag march in the campus late Sunday evening. Close to 700 police personnel remained deployed outside JNU gates on Monday.

“We responded to PCR calls, and law and order situation professionally. FIR has been lodged in the matter. Investigation is underway. Footage is being collected. The case is with Crime Branch now. Besides, Delhi Police’s joint CP western range, Shalini Singh, is the head of separate fact-finding committee,” said Delhi Police PRO, M.S. Randhawa. He added that some vital clues have been found and the Crime Branch is working on it.

Union Home minister Amit Shah on Monday spoke with Delhi’s Lt Governor Anil Baijal about JNU violence, while the secretary of ministry of human resource development called JNU administration and sought a report on Sunday’s incident. JNU vice-chancellor Jagadesh Kumar was not present in the meeting.

Union HRD minister Ramesh Pokhriyal, who is in Orissa, said educational institutions cannot be allowed to become “political adda” and promised to take “strong action” against the perpetrators of violence at JNU.

Students from universities and colleges across the country and abroad staged protests in solidarity with JNU even as JNU Teachers’ Association and JNUSU demanded removal of the vice-chancellor. In some cities, including Mumbai, citizens began peaceful protests on Sunday night itself.

Opposition parties, apart from expressing solidarity with JNU students, sought the intervention of President Ramnath Kovind in the matter. Joining the chorus of support for JNU students were actors and actresses from Bollywood and South India. Several in the film industry reacted sharply backing JNU students with several actors joining the protest on Mumbai’s Carter Road.

The Indian Medical Association too issued a statement condemning the attack on its doctors who were stationed in JNU. “How does that reflect on the nation, if it cannot protect its doctors and nurses reaching to the injured? Is this a civil war? What is the message that goes pout to the world?” IMA said in a statement.

In an interesting comment that is open to interpretation, external affairs minister S. Jaishankar, an alumni of JNU, said on Monday, “When I was in JNU, we did not see any tukde-tukde gang there.”

The “tukde-tukde” term and theory, along with “urban Naxals” has been floated by his party, the BJP, to paint Left-wing students as “anti-nationals”. These terms have been used by Mr Shah and Prime Minister Narendra Modi in their speeches.

On December 26, Mr Shah had, in his campaign speech for Delhi elections, said it is time to punish the “tukde-tukde gang” in Delhi for anti-Citizenship Amendment Act (CAA) protests and violence.