India   All India  07 Jan 2019  Mehbooba Mufti desperate to reconnect with her voters
India, All India

Mehbooba Mufti desperate to reconnect with her voters

Mufti quickly made her mark as the Leader of Opposition in the Assembly, taking on the government of the then chief minister Farooq Abdullah. 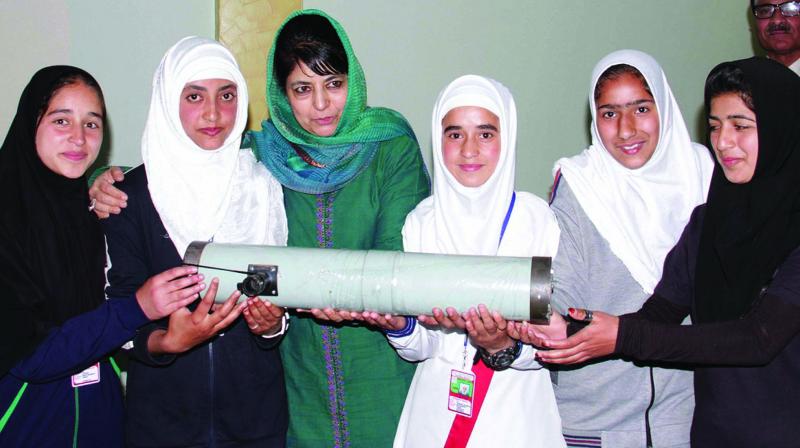 Former J&K chief minister and PDP chief Mehbooba Mufti has recently stepped up her visits to families of slain militants and victims of violence. Her critics say that it is with the sole purpose of regaining her lost popularity.

Srinagar: PDP chief and former Mehbooba Mufti appears desperate to reconnect with her “constituency”, but to regain the popularity she enjoyed until a couple of years ago is no easy task for the former chief minister of Jammu and Kashmir.

As militancy gave way in the mid-1990s to a period of harassment by Ikhwanis, the renegades working in tandem with the security forces, the “passionate side” of Ms Mufti’s nature became evident. She would be the first to arrive at the home of any victim of the horrific violence of the time. With fiery gusto, she would agitate and plead with high-handed officers of the security forces as often as she led demonstrations. She would also explicitly commiserate with the families of the slain militants and even visit their homes to share the grief of their families, for she believed they deserved empathy and not rejection.

Her name soon became a byword for empathy and solace in the south Kashmir stretch from the edge of Srinagar to the intensely violence-ravaged areas south and west of Anantnag. When elections for the state Assembly were held in 1996, she became one of the most popular lawmakers, elected from hometown Bijbehara on a Congress ticket. Her father Mufti Muhammad Sayeed had at that time returned to the Congress, which he had left in 1987 in protest against its forming an alliance with the National Conference (NC).

Ms Mufti quickly made her mark as the Leader of Opposition in the Assembly, taking on the government of the then chief minister Farooq Abdullah. The father-daughter duo split from the Congress in 1999 to launch their own People’s Democratic Party (PDP). Her tryst with the victims of violence continued in her own fashion and the strategy helped her and the PDP in the coming elections. The PDP emerged as a major winner in the October 2002 Assembly polls and soon the party captured power in J&K in partnership with Congress. There was no looking back for the PDP president Ms Mufti.

After more than six years, the PDP formed its second government in J&K in March 2015 -- this time in an alliance with BJP. PDP patron Mufti Sayeed who took over as chief minister for full six-year term on March 1, 2015 died in office on January 7, 2016. Ms Mufti took over as chief minister of the restive state after a delay of nearly three months following the death of her father. The reluctance to sit in the hot seat was projected by her party as testimony of her not being ‘power hungry’ or an opportunist daughter. In fact, she herself went on record to say that she wanted certain J&K-specific “confidence building measures” before she could give a thought to stepping into her father’s shoes. She also insisted on unspecified concessions as prerequisite for government formation.

Finally, she held a ‘broader reconciliation’ meeting with Prime Minister Narendra Modi in New Delhi in March 2016 and returned home to proclaim her renewed fondness for the BJP which in turn asserted the one-on-one meeting between the two was an affirmation of mutual understanding. The Centre, however, did not announce any concessions.

On June 19, 2018, the BJP suddenly decided to yank support from Ms Mufti-led coalition government saying it had become untenable for it to continue in alliance with the PDP. The BJP’s move was seen by Kashmir watchers as an embarrassment to Ms Mufti as well as her party. She, however, soon sought to play the victim card and tried to wriggle out of the situation by saying “muscular (security) policy will not work in Jammu and Kashmir”.

She, however, now admits that her allying with the BJP was a blunder as her party suffered heavily because of picking up an “unnatural” partner. Her critics say that what she does not admit is the fact that her popularity slumped to record low while in power as it turned out to be the bloody tenure that witnessed the maximum casualties among both civilians and security forces.

Her critics also say that it is with the sole purpose of regaining her lost popularity that Ms Mufti is again publicly seeking to identify herself with the “victims” of violence. Recently after visiting the families of two militants, she warned that she “won’t allow bloodshed in Kashmir or turning southern Kashmir into a battleground”. She said that the fight against militancy should not involve the families of the militants and public.

Governor Satyapal Malik was the first to react to her outbursts. Terming them as her “political compulsion”, he said that Ms Mufti was now supporting militants “to regain the lost base in the Valley”. Her political bête noire and NC leader Omar Abdullah was more blunt in criticising her. He tweeted, “The architect of “Operation All-out” and the overseer of the operations that killed hundreds of militants since 2015 is now going from one militant home to the next trying to rehabilitate a badly damaged reputation.” In another tweet, he alleged, “She used militants by sanctioning their deaths to appease the BJP and now she uses dead militants to try to appease the voter. Just how gullible does she think people are?”

Former minister Abdul Gani Vakil called her “best drama queen” and alleged that she oversaw “massacre” of hundreds of people during her tenure. He asked, “Why was she silent while being in power and oversaw the massacre of young and old. Besides, thousands were blinded by pellets.”

Her former ally BJP dismissed her visits to militants’ families as a “political gimmick” and sought to remind her of the remarks she made as chief minister during a press conference at the peak of 2016 agitation following killing of Hizbul Mujahideen commander Burhan Wani. While responding to a question about the civilian killings, Ms Mufti told the reporter, “Were they out to buy toffee or milk?”

When a group of masked youth proclaimed their allegiance to Daesh or the Islamic State (ISIS) while appearing in Srinagar’s historic Grand Mosque, and chanted slogans in favour of making Jammu and Kashmir part of “Islamic caliphate”, she telephoned the Valley’s chief Muslim cleric and separatist leader Mirwaiz Umar Farooq to condemn the incident. Later she tweeted, “Jama Masjid & its pulpit are most imp landmarks of our religious, cultural moorings. Can’t allow barbaric forces to defile it in the name of Islam.”

The Mirwaiz’s party, however, termed it as “quiet ironical” and said that it was during her tenure as chief minister that the mosque was locked and he (Mirwaiz) put under house arrest by police most of the time. Many netizens too have ridiculed Ms Mufti over her recent activity and called it “share opportunism”.

However, Ms Mufti’s close aide and former minister Naeem Akhter said, “There is nothing unusual in it. The PDP is all about reaching out to the people. Our main agenda is (to seek) the resolution of Kashmir issue and unless we reach out to the people how we can work on our agenda.”