The Indian Navy has been closely monitoring the movement of foreign vessels in the Indian Ocean in India’s vicinity. 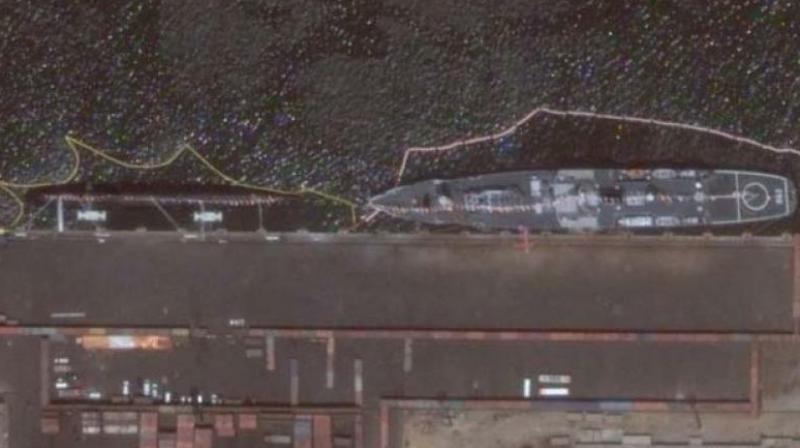 New Delhi: The dragon’s (China) footprints in the Indian Ocean seem to be growing by the day, with reports of satellite imagery indicating that a Chinese nuclear-powered submarine docked at Pakistan’s Karachi port in May this year.

Initial reports of the submarine docking at Karachi had surfaced in May 2016 itself but the satellite imagery now appears to have triggered fresh concern in the Indian security establishment. The Indian Navy has been closely monitoring the movement of foreign vessels in the Indian Ocean in India’s vicinity, especially Chinese submarines, which may have been keeping a close watch on Indian warships. This comes at a time when the Navy, itself, desperately needs fresh induction of submarines to replenish its ageing fleet.

During the tenure of the Rajapaksa regime in Sri Lanka, the presence of Chinese nuclear submarines in Sri Lankan waters had shaken New Delhi, which promptly took up the matter with the Rajapaksa government in Colombo, which was actively encouraging Beijing in its designs.

In fact, an internal defence thinktank report of the Indian government prepared a few years ago had revealed, “China’s recent strategic manoeuvres in and around the Indian Ocean Region (IOR) pose a threat to both India’s economic and security interests. China’s naval capabilities have significantly expanded over the past few years with induction of new submarines, like the Shang and Jin class boats. It is well entrenched even in public discourse through think tanks and other agencies that the Chinese naval capability is proving to be a major limiting factor to other regional navies, especially the Indian Navy (IN). Chinese interests in the IOR will demand attempts to begin deterrent patrolling as early as within the next three years. These extended patrols may fully overlap with India Navy’s current area of operation and subsurface activity.”

The report added, “Unclassified Chinese economic and military investments in the IOR will require a rapid evolution of subsurface support for the entire gamut of activity, both existing and prospective. Without adequate bilateral military linkages and transparency standards, the threat of a serious reduction in sea denial and anti access in the IOR is a reality. In four to six years, it may be commonplace to assume that Plan SSNs (nuclear-powered submarines) are very much part of forces operating in a full-fledged manner in the IOR. According to information, since 2000, China has rapidly expanded its arsenal of anti­access and area-denial capabilities in the southern IOR. China is acquiring the ability to hold large surface ships, including aircraft carriers, at risk (via ocean­going submarines, anti­ship missiles, wire­guided torpedoes, or anti­ship ballistic missiles), posing a major threat to all forces operating in the IOR.”