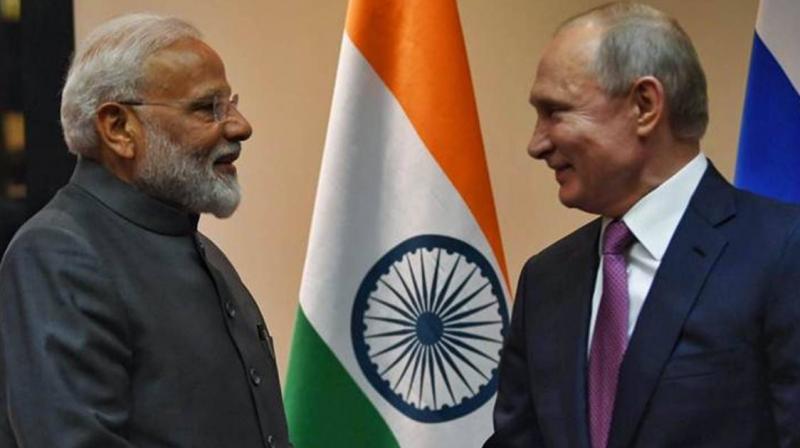 After the formal talks, both leaders will further converse over dinner, following which President Putin will head back to Moscow late on Monday night. (PTI file photo)

New Delhi: Russian foreign minister Sergey Lavrov is arriving in New Delhi on Sunday night for the inaugural 2+2 meeting with India at the foreign and defence ministerial level on Monday morning, while Russian President Vladimir Putin will reach the city on Monday for the annual bilateral summit with Prime Minister Narendra Modi later in the evening. Both nations are expected to further strengthen their decades-old bilateral strategic partnership and sign several new pacts in defence, trade, energy and other sectors. The ongoing bilateral cooperation in the civil nuclear sector is also likely to be discussed. Mr Lavrov will be joined by Russian defence minister Sergey Shoigu for the 2+2 meeting with external affairs minister S. Jaishankar and defence minister Rajnath Singh.

A deal for the production of over five lakh AK-203 assault rifles at Korwa in Amethi, Uttar Pradesh, in partnership with Russia is expected to be signed on Monday while a long-awaited mutual defence logistics support agreement with Moscow may also be inked. A joint statement will also be issued on Monday evening after the summit, which will be keenly scrutinised for any references to the crucial S-400 missiles that India is acquiring from Russia despite the threat of American sanctions.

Mr Jaishankar will first hold a bilateral meeting with Mr Lavrov while defence minister Rajnath Singh will hold a separate meeting with Mr Shoigu. This will be followed by the 2+2 meeting. The Indian side had on Saturday approved the plan for production of over five lakh AK-203 assault rifles at Amethi, UP, in partnership with Russia.

While the situation in Afghanistan is expected to be discussed in detail between President Putin and Mr Modi, India’s strained relationship with China is also expected to be discussed with Mr Putin. It may be recalled that Russia had played a key role in informally brokering peace between the two Asian giants last year following the Sino-Indian military face-off in the Ladakh sector. Both India and Russia are also expected to take a tough stand jointly against terrorism, particularly by Pakistan-based terror groups. After the formal talks, both leaders will further converse over dinner, following which President Putin will head back to Moscow late on Monday night.

Sources had said earlier on Saturday said trade, energy and connectivity are also an important focus in bilateral ties. Eleven governors from the Russian Far East provinces are also likely to be invited for the coming Vibrant Gujarat Summit. Bilateral trade targets between the two nations were earlier revised to an enhanced target of $50 billion by 2025 after the original target of $30 billion was met in 2018 itself. The Chennai-Vladivostok maritime corridor connectivity project is also expected to be 30 per cent cheaper and 40 per cent shorter compared to the Suez Canal route.