Govt is clueless on eco, mantris are bluffing: P Chidamabaram

Sources said he would address a press conference in Ranchi, Jharkhand, on Friday where the five-phase Assembly elections are on. 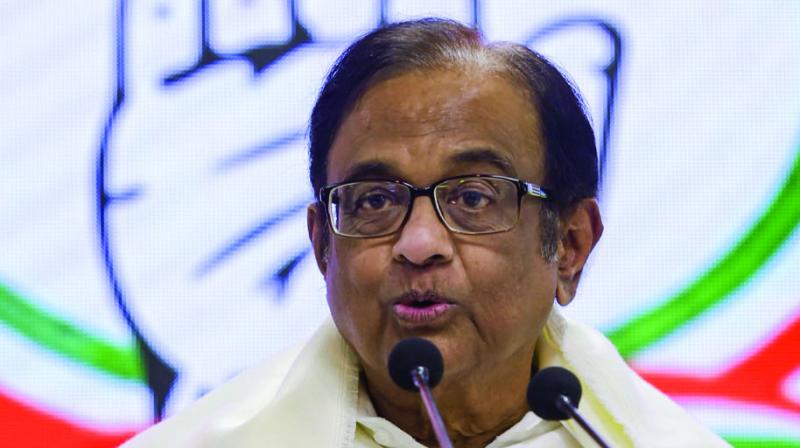 New Delhi: A day after being released on bail after 106 days, former finance minister P. Chidamabaram on Thursday hit the ground running, taking on the Narendra Modi government over the state of the economy and joining his colleagues in Parliament for a protest over the rising price of onions. Sources said he would address a press conference in Ranchi, Jharkhand, on Friday where the five-phase Assembly elections are on.

Addressing the media at the AICC headquarters here, Mr Chidambaram said even after seven months, the Centre believes the economic slowdown was cyclical, but the “government is wrong”.

“It is wrong because it is clueless. It is unable to look for the obvious clues because it is stubborn and mulish in defending its catastrophic mistakes like demonetisation, a flawed GST, tax terrorism, regulatory overkill, protectionism, and centralised control of decision-making in the Prime Minister’s Office,” he said.

Contending that the current slowdown was not cyclical, but structural in nature, he said the government had no solutions or reforms to address the structural problems.

“I believe that the Congress and some other parties are better equipped to pull the economy out of the slowdown and push economic growth, but we have to wait for better times,” the former Union minister added.

To a question on industrialist Rahul Bajaj’s remarks to home minister Amit Shah that people were scared to criticise the government, Mr Chidambaram said: “There is fear everywhere. The media is also gripped with fear”.

On finance minister Nirmala Sitharaman’s comments on not eating much onions, he quipped in a lighter vein: “Does she eat avocadoes?”

The senior Congress leader, also a former home minister, said he would like to go to Kashmir if the government allowed him to. He said his first thoughts on his release were with the Kashmiri people who “have been denied their basic freedoms since August 4, 2019”.

Asked if parallels can be drawn between the Centre’s assurances on issues in Kashmir and the economy, Mr Chidambaram answered in the negative, saying as far as the economy is concerned “the reason is incompetence,  while in Kashmir it is the government’s arrogance”.

On the withdrawal of SPG cover for the Gandhi family, Mr Chidambaram said if the government believed the Gandhi family did not require SPG protection, “then that is a cross the government has to bear”. Sources told this newspaper that the former FM will travel to Ranchi and address a press conference there on Friday afternoon on the state of the economy. Mr Chidambaram was released on bail on Wednesday after spending 106 days in jail.