India   All India  06 Dec 2018  'If BJP comes to power Karimnagar, Hyd will be renamed': Yogi Adityanath
India, All India

'If BJP comes to power Karimnagar, Hyd will be renamed': Yogi Adityanath

Yogi Adityanath said if BJP comes to power it will rename Hyderabad to ‘Bhagyanagar’. 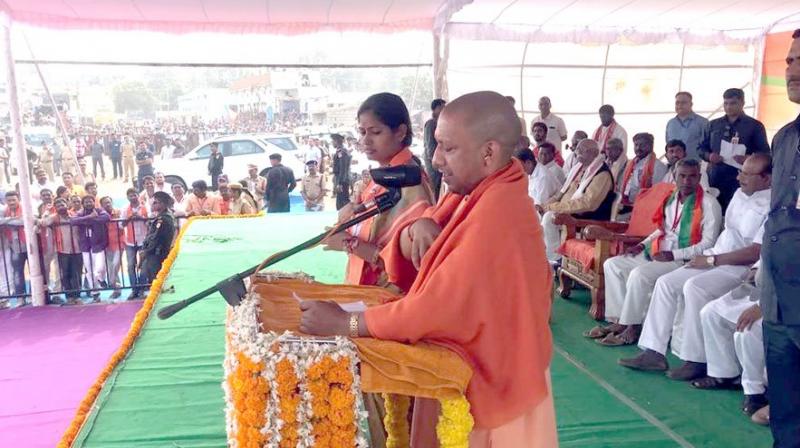 'If BJP comes to power in Telangana, then the BJP will work towards renaming Karimnagar into ‘Karipuram’ and respect your sentiments,' Yogi Adityanath said. (Photo: Twitter | @myogiadityanath)

Hyderabad: Campaigning for the BJP in Telangana for the December 7 assembly elections, Uttar Pradesh Chief Minister Yogi Adityanath has promised that his party will change the name of Karimnagar district if it voted to power in the state.

Adityanath also said that if BJP comes to power it will rename Hyderabad to ‘Bhagyanagar’.

Addressing election rallies in Karimnagar district and Bodhan town of Nizamabad district, Adityanath said: “If BJP comes to power in Telangana, then the BJP will work towards renaming Karimnagar into ‘Karipuram’ and respect your sentiments. If the BJP government is formed, then Hyderabad’s name will be changed to ‘Bhagyanagar’… on similar lines you have seen in Uttar Pradesh…we have renamed Faizabad as Ayodhya and Allahabad to Prayagraj”

“…only BJP can do this work…because it is only the BJP which respects your culture, tradition, heritage and your ancestors and wants to take 'Bharat ki vyavastha' (India’s setup) forward," he said.

The BJP government in Uttar Pradesh has changed the name of Allahabad to Prayagraj, Faizabad to Ayodhya and Mughalsarai Junction to Pt Deen Dhayal Upadhyay junction.

Addressing the rally, Adityanath on Wednesday alleged that the policy of appeasing people was responsible for terrorism and Naxal problems in the country, and asserted that only BJP could firmly deal with these issues.

"The BJP will resolve the Naxal issue and act sternly against the anti-India activities of the ISI (Pakistan's spy agency Inter Services Intelligence) to ensure security for every citizen," the Uttar Pradesh Chief Minister said.

"I have come here to tell you to that only the BJP can effectively tackle Naxals and deal with ISI activities with an iron hand and ensure security for every citizen of the country. Hence I have come to seek your support for the BJP," he said.

He said the fight against terrorism, Naxalism, anarchy and poverty should be fought by entire country and not one individual.

He accused the K Chandrashekar Rao-led government of betraying the people of Telangana for the last four-and-a-half years and alleged that prior to this (in undivided Andhra Pradesh), the Congress and the TDP had exploited them. Had the previous governments worked honestly, then the standard of living of the public would have improved a lot.

Be it the Congress, the TDP, the TRS or the MIM, all these parties had exploited the people of Telangana and did not do any work for public interest, he claimed.

"Had these people (Congress, TDP, TRS) taken the development work forward, provided employment to the youth, worked for farmers' welfare and put elaborate security arrangements in place, then Karimnagar would not have marched towards becoming a hub of ISI activities," he asserted.

"MIM which wants to encroach in your Bodhan... They will all be seen running away and their whereabouts will not be known. BJP will smash their "Dangai mansube" (rowdy design) and will expose them," he said addressing a rally in Bodhan town.

Adityanath said there was a need to expose and reject those indulging in anti-India activities, have a 'rowdy mentality' and block development.

The 119-member Telangana Assembly will go to the polls on December 7 and the results will be announced on December 11.