UP CM had announced compensation of Rs 40L for Singh's wife, Rs 10L for his parents and a government job for a member of his family. 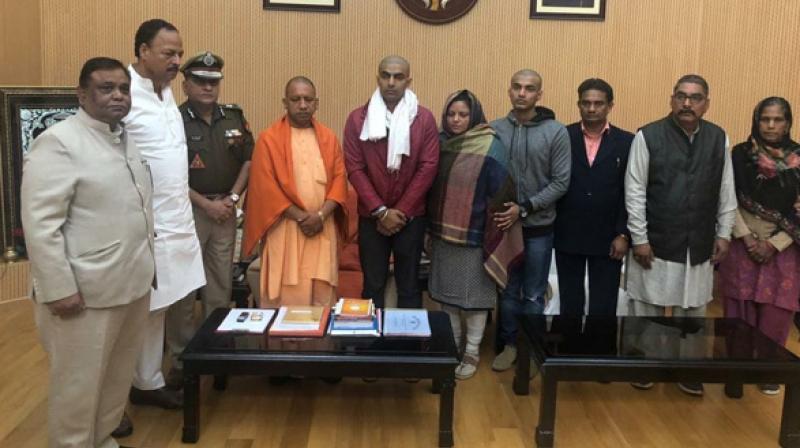 Lucknow: Uttar Pradesh Chief Minister Yogi Adityanath on Thursday met with the family of inspector Subodh Singh, who was recently killed in Bulandshahr violence which was triggered by rumours of alleged cow slaughtering in the vicinity.

The Chief Minister met the bereaved family at his residence located on Lucknow's Kalidas Marg.

Following the gruesome incident, Adityanath had announced a compensation of Rs 40 lakh for Singh's wife, Rs 10 lakh for his parents and a government job for a member of his family.

According to sources, the post-mortem examination conducted on Subodh Kumar confirmed gunshot injury by a .32 mm bore bullet on his head. Till now, four people have been arrested in connection with the killing of the police officer.

Shrey Pratap Singh, son of Police inspector Subodh Singh said, "We met the Chief Minister and he has assured us that we will get justice."

Law and order is usually good here but the police were kept in dark about the Islamic congregation that happened here, which caused chaos. This is the cause of this violence," said Bhola Singh, Bharatiya Janata Party MP from Bulandshahr.