The ASEC is expecting that the voting percentage will rise by another 10 percentage points. 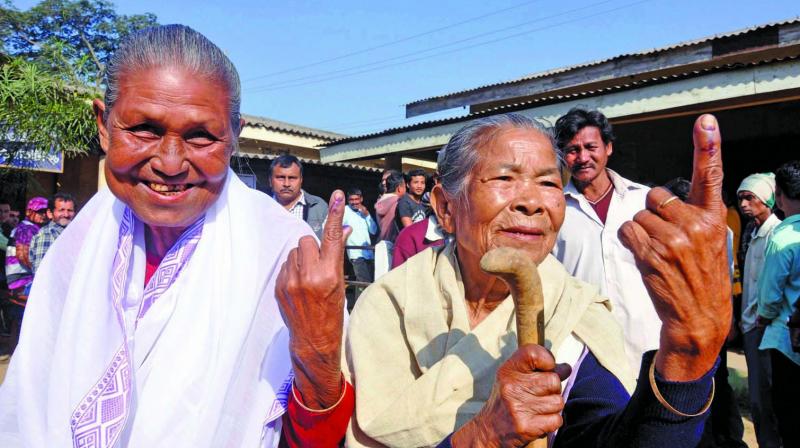 Guwahati: In what is said to be the first litmus test of the BJP-led alliance government in Assam, the first phase of panchayat elections concluded on Wedne-sday, with over 65 per cent polling recorded.

“Till 3 pm, we have seen polling of 65.5 per cent. But this figure will go up as long queues are still there at many booths. Some districts said polling is likely to continue till 10 pm,” Assam state election commissioner H.N. Bora said.

The ASEC is expecting that the voting percentage will rise by another 10 percentage points.

The state witnessed 76.76 per cent voting in the last panchayat elections in 2013.

Except few sporadic incidents of violence, the polling was by and large peaceful in 16 districts. The police said that in a clash between the electorates and the police, a person, identified as Gynendra Rajlhowa, was killed in police firing at Habichuk in Habial village in Golaghat district.

The state election commission told reporters that there have been few incident of violence, but elections were peaceful in majority of the areas of the state. “We are waiting for the report of the deputy commissioners and accordingly action will be taken,” he said, adding that the polling was also suspended in some polling booths because of error in voter lists and ballot papers of few constituencies.

In the first phase, the elections were held in 16 out of 27 districts, which included Dhemaji, Lakhi-mpur, Tinsukia, Dibrug-rah, Sivasagar, Charaideo, Jorhat, Majuli, Golaghat, Nagaon, Biswanath, Sonitpur, Darrang, Morigaon, Kamrup Metro and Kamrup. These together comprise of 27 election districts.

Over 70,000 polling personnel and more than 50,000 security personnel were deployed in the first phase of rural polls.

The panchayat polls are held at a time when there are widespread protests in the state over the citizenship bill. The elections are also seen as a test for the ruling BJP which came to power in a coalition in the state in 2016, winning 60 of the 126 seats in the state Assembly.

The Citizenship Bill in Assam has created a rift between the ruling BJP and its ally Asom Gana Parishad (AGP). The leaders of the two ruling parties have not only campaigned separately in the panchayat polls but were extremely critical against each other.

The Congress and the All-India United Democratic Front (AIUDF) are treating the panchayat election as an opportunity to regain lost ground in the state.

The ensuing panchayat polls have also witnessed massive flow of fund with ruling BJP and opposition AIUDF using helicopters for the elections campaigns.

Assam chief minister Sarbnananda Sonowal and his deputy Himanta Biswa Sarma have been the star campaigner of the ruling BJP whereas opposition Congress, apart from its state leaders, has pressed former Uttarakhand chief minister and in-charge of the party in Assam Harish Rawat to motivate the party workers to make their presence felt in the local polls.