Coincidently, today is the 25th anniversary of the Babri Masjid demolition in Ayodhya. 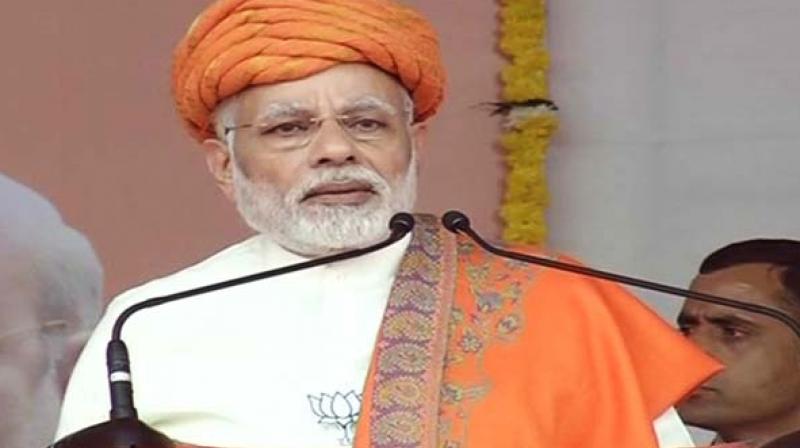 Modi further added, 'Now Congress is linking Ram Mandir with elections. They are least bothered about the nation.' (Photo: ANI)

Addressing a rally in Dhandhuka, Prime Minister Modi trained guns at the Congress over its leader Kapil Sibal's arguments in the Supreme Court (SC) in the Ramajanambhoomi-Babri Masjid case.

"Yesterday in the SC, a Congress MP Kapil Sibal was arguing (which is his right) for the Babri Masjid. He is entitled to do that but is it right for him to say: postpone hearing till 2019? Why does he have to link a Ram Mandir with elections? Is such thinking proper," the Prime Minister asked.

Coincidently, today is the 25th anniversary of the Babri Masjid demolition in Ayodhya.

He further added, "Now Congress is linking Ram Mandir with elections. They are least bothered about the nation."

While representing the Sunni Waqf Board in the Ramjanambhoomi-Babri Masjid case on Tuesday, Sibal urged the court to take up the matter after 2019 general elections as "the case was being used to polarise the electorate with an eye on the polls".

The court didn't accept his appeal and set the final hearing for February 8, 2018.

Since then the Bharatiya Janata Party (BJP) has been cornering the Congress by asking to clarify what was the real meaning of Sibal's statement.

Addressing a press conference in poll-bound Gujarat, BJP president Amit Shah demanded Congress should clear its stand on this.

Speaking on the issue of 'triple talaq', Modi said "When the matter was in the Supreme Court, the Government had to put their affidavit. The media commented that Modi will remain silent because of Uttar Pradesh polls".

People told me not to speak on the matter else there will be losses in elections, he said

Maintaining his stand that he will not remain silent on the issue of 'triple talaq', Modi said, "I am clear that on 'triple talaq' I will not be silent. Everything is not about elections. This issue is for the rights of women... elections come later humanity comes first".