Staff member of another school was arrested in connection with the sexual assault of a 3-year-old student twice. 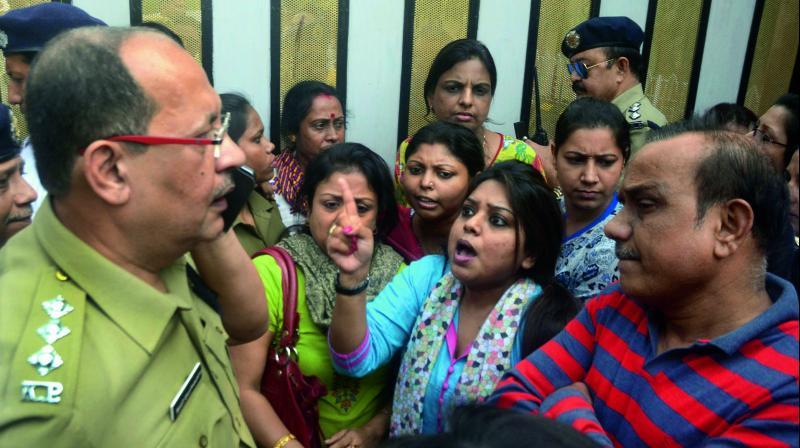 Situation intensified in Kolkata as the police lathicharged on a gathering of protesting parents, demanding the arrest of the accused. (Photo: Abhijit Mukherjee)

Kolkata: Principal of G D Birla School Sharmila Nath was questioned by the police on Tuesday, for disclosing the name of the sexually assaulted four-year-old student in a letter she sent to nearly 4,000 parents of the school.

The storm, however, continues to brew as staff member of another school -- this time M P Birla -- was arrested on Monday night in connection with the sexual assault of a three-year-old student twice.

Manoj, the arrested staff member, is charged with molesting the student once in June, and once in September.

Parents of the child had made an official complain to the police, but the arrest was made recently, following demonstrations by other parents in lieu with the sexual assault of a four-year-old in G D Birla School.

The situation intensified as the police lathicharged on a gathering of protesting parents in front of M P Birla school, demanding the arrest of Manoj.

In a statement made on the Facebook page of Kolkata Police, however, it has been claimed that the lathicharge was strictly in order to control the unruly mob, which in addition to blocking a vital traffic passage, were not allowing students and teachers of the school to leave campus.

"The mob got into the school buses and conducted searches, so that no teacher leaves the campus. Such violent behaviour disturbed and traumatized the students. To stop the mob from scaring the children, the police decided to remove the gathering forcefully," the statement read.

Several protest programmes were also undertaken by various students and civil society groups in the city, demanding justice for the victims.

One such event, slated to happen on December 8, is also demanding the arrest of Manjushree Khaitan, grand-daughter of Ghanshyam Das Birla and owner of the school.

The Council for School Certificate Examinations (CISCE), in a circular issued on December 4, has made it mandatory for all schools to install CCTV cameras within two weeks.

"We are upgrading the safety manual for schools, but for the time being they will have to adhere to the measures specified in the circular," said Gerry Arathoon, secretary and chief executive of CISCE, according to reports.