Sources said the list was sent much in advance to Pakistan, but no confirmation has been received on that. 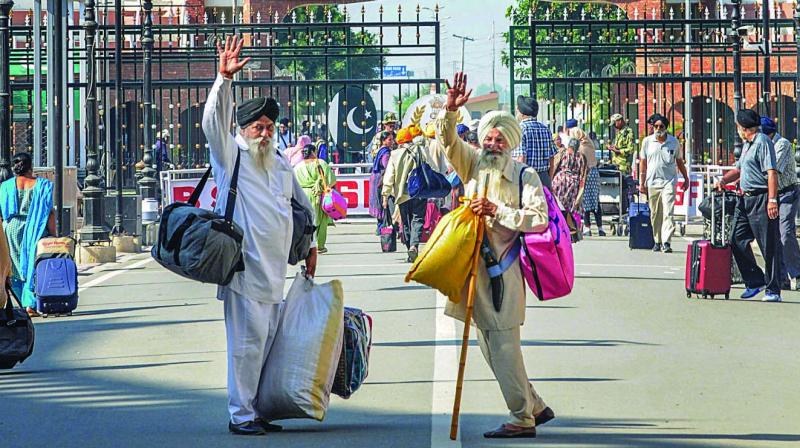 Devotees leave for Pakistan via the Attari-Wagah border on Tuesday. (Photo: PTI)

New Delhi: Confusion and lack of coordination between India and Pakistan is evident five days before the inauguration of the Kartarpur Corridor, with sources in the Indian government claiming Pakistan hasn’t let any Indian advance team visit Kartarpur Sahib to confirm the arrangements made. Islamabad also hasn’t sent any confirmation on the list of dignitaries sent by New Delhi, they said.

“India has all along remained strongly committed to expeditiously realise the Kartarpur Corridor on time, keeping in mind the sentiments of pilgrims. The infrastructure work on our side has been completed on time. We even agreed to go ahead with the MoU despite Pakistan’s insistence on levying a $20 service fee on pilgrims,” the sources said. They added that despite India’s commitment and efforts, “Pakistan refuses to extend full cooperation, which is against the spirit of the pilgrimage”.

India is also upset Pakistan has not yet responded to the list of prominent Sikh leaders and other dignitaries who will be part of the inaugural jatha to Kartarpur Sahib on November 9. Sources said the list was sent much in advance to Pakistan, but no confirmation has been received on that.

Former Prime Minister Manmohan Singh, Punjab chief minister Amarinder Singh, and Union ministers Harsimrat Kaur Badal and Hardeep Singh Puri are among the dignitaries who will be travelling through the Kartarpur Corridor on the inauguration day. It has been made clear that Dr Manmohan Singh and others will travel as pilgrims and not as invitees for the inauguration planned by the Pakistan government.

Besides, there is also lot of confusion on the Indian side after Pakistan PM Imran Khan’s tweet on Friday where he announced waiver of the mandatory 10-day registration process for Indian Sikh pilgrims needed to visit Kartarpur Sahib Gurdwara, and carrying of passports as identity proof. Mr Khan also announced waiver of the $20 service fee for all Indian pilgrims coming on the inauguration day, November 9, and on Guru Nanak’s 550th birth anniversary, November 12.

“For Sikhs coming for pilgrimage to Kartarpur from India, I have waived off 2 requirements: i) They wont need a passport — just a valid ID;  ii) They no longer have to register 10 days in advance. Also, no fee will be charged on day of inauguration & on Guruji’s 550th  birthday”, Mr Khan had tweeted on Friday.

However, sources in the Indian government said so far no official communication has reached them. They added that any change, as announced by the Pakistan PM, would mean modification of the Memorandum of Understanding signed between the two countries on October 24. In such a scenario, a fresh MoU will have to be signed.

“There is absolute confusion created by Pakistan PM Imran Khan’s tweet that no passports will be required to undertake the pilgrimage. This requirement is, however, mentioned in the MOU. There has been no offer from Pakistan to amend the MoU in light of Mr Khan’s tweet. Pilgrims are, therefore, unclear on the documents they need to carry,” the sources added.

The Indian side is also upset that Pakistan unilaterally decided on the programme and timing of the inaugural jatha without taking the Indian government’s inputs in this matter into account. “Critical information such as medical facilities available and security arrangements for pilgrims were also not shared,” the sources said.

A large number of Indian Sikhs on Tuesday visited the Kartarpur Sahib Gurdwara and installed a golden palanquin at the shrine.

Pakistan had on Monday released the photographs of the illuminated Gurdwara Kartarpur Sahib and the corridor along with the official song of the opening ceremony. On Sunday, Pakistan released a commemorative stamp on the occasion of the 550th birth anniversary of Guru Nanak. It was announced Pakistan Post will set up a post office at the Kartarpur complex to help Sikh pilgrims, while another post office will be opened at Nankana Sahib.

Pakistan has, meanwhile, made it mandatory for tour operators to obtain a No Objection Certificate from its interior ministry before taking foreign Sikhs, besides Indians, to Kartarpur Sahib.