30-year-old woman at base camp; shrine a fortress. 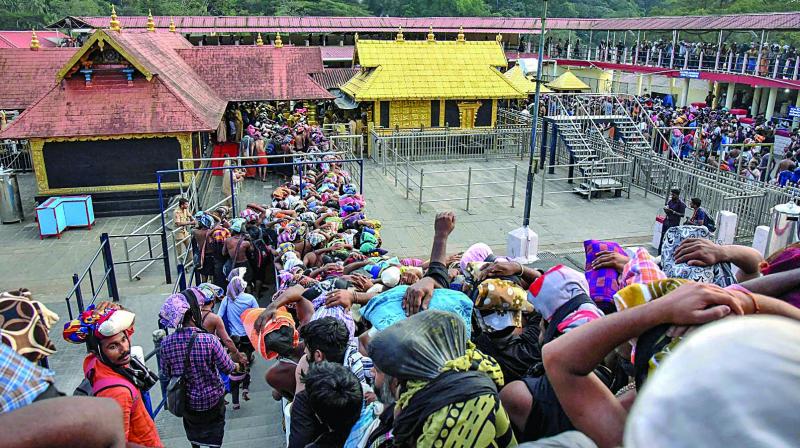 Devotees arrive at the Sabarimala temple in Kerala’s Pathanamthitta district on Monday. This is the second time the hill shrine opened for “darshan” after the Supreme Court allowed the entry of women of all age groups. (Photo: PTI)

Sabarimala (Kerala): The doors to the Ayyappa temple here opened Monday for the second time in three weeks for a two-day special puja amid unprecedented security over fears of protests by those opposing the Supreme Court order allowing women of all age groups into the shrine.

Though no girl or woman in the 10-50 age group was spotted at the temple, the abode of Lord Ayyappa, its eternally celibate deity, the police said a 30-year-old woman had reached the base camp at Pamba along with her husband and two children. However, the woman, Anju, a native of Cherthala in Alappuzha district, told the police that she was not keen to visit the shrine and admitted she had come to Pamba following pressure by her husband Abilash. The police claimed it was her husband who was adamant that the family, including their children aged seven and four, do the pilgrimage.

The Kerala police spoke in conflicting voices about the development, with a local official claiming the woman had sought police protection, while superintendent of police Rahul R. Nair said the woman had not sought a police escort.

As the husband continued to stick to his stand, the police decided to ask their relatives to come to Pamba to take a final decision. Anju and her family are waiting at the police control room as the temple closed its doors at 10 pm. Sabarimala virtually turned into a fortress with hundreds of police personnel, including armed commandos, dotting the place where surveillance cameras and mobile phone jammers were installed. Thousands of pilgrims entered the temple as temple tantri (head priest) Kandararu Rajeevaru and melshanti (chief priest) Unnikrishnan Namboothiri jointly opened the portals of the sanctum sanctorum at around 5 pm. No special puja will be performed Monday, the temple authorities earlier said, adding the doors will be closed at 10 pm. It will open again on Tuesday for the “Sree Chitira Atta Thirunal” puja to mark the birth anniversary of the last king of the princely state of Travancore Chithira Thirunal Balarama Varma.

Security at Sabarimala was stepped up following violent protests by fringe Hindu groups and mainstream political parties like the Congress and the BJP against the Kerala government’s decision to enforce the Supreme Court order lifting the ban on girls and women of menstruating age from entering the temple.

Frequent checking and frisking by the police did not go down well with devotees and right-wing activists who protested at several places. TV channels showed heated exchanges between devotees and the police over the frisking. Devotees complained of lack of amenities at the base camps that were damaged in the unprecedented floods in August. Even journalists were not allowed to leave the Nilackal base camp for Pamba on way to the temple in the morning, but the restriction was lifted later in the day.