Mr Hiphei told reporters the AICC had cleared his name but the Mizoram Congress was not announcing his candidature. 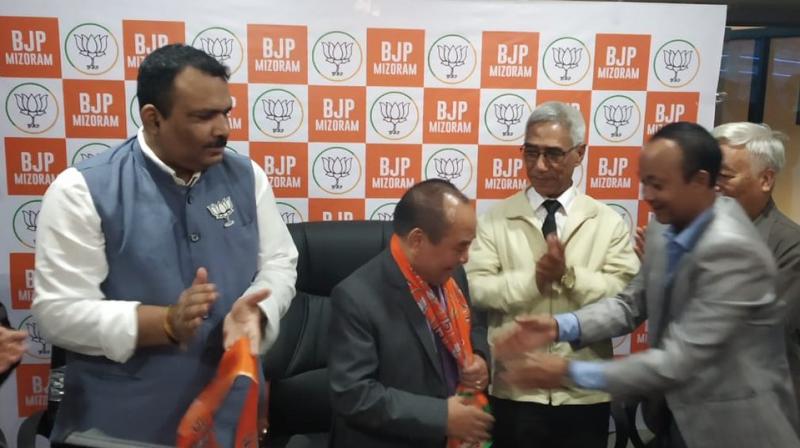 Guwahati: In a major setback for the Congress, which is in power in Mizoram, Assembly Speaker and senior Congress leader Hiphei resigned from his post as well as the primary membership of the party on Monday and joined the Bharatiya Janata Party. This comes just three weeks before Assembly elections in the state.

However, speculation on his resignation had started last week after his meeting with senior Assam BJP leader and senior minister Himanta Biswa Sarma, who is also the BJP in-charge for the Mizoram polls.

Mr Hiphei told reporters the AICC had cleared his name but the Mizoram Congress was not announcing his candidature. Mr Hiphei, who was elected to the Assembly seven times, was seeking nomination from Palak constituency, but political differences in the Mara Autonomous District Council areas prompted the party to field K.T. Rokhaw as its candidate.

A veteran Congress leader from Siaha, Mr Hiphei was elected MLA from Palak constituency in 2013 state election. He won the state elections six times between 1972 and 1989 from Tuipang. He also served as Rajya Sabha MP for two terms (1990-1996 and 1996-2002). He is the fifth Congress MLA to resign from the 40-member House since September.

Mr Hiphei, announcing his decision to join the BJP, thanked Congress leader Sonia Gandhi for her support while he was in the party and attributed his decision to leave to the state leadership.

He said: “I am very much influenced by the economic policies of Prime Minister Narendra Modi. Moreover, the BJP leadership has assured me that it will change the financing pattern of the Mara Autonomous District Council.

The proactive approach of Assam finance minister Himanta Biswa Sarma, who took me to the national capital for a meeting with BJP leaders has (led to my) move to the BJP.” North-East Democratic Alliance convenor and BJP leader Himanta Biswa Sarma told reporters that Mr Hiphei, 81, would join the saffron party in his presence in Mizoram’s capital Aizawl. “He is a very senior leader. His joining the saffron party will greatly strengthen the organisation,” Mr Sarma said.

The senior BJP leader did not, however, comment on whether the party would field Mr Hiphei from any constituency in the forthcoming Assembly polls in the hill state. Mizoram, the only state in the Northeast under Congress rule, will go to the polls on November 28. The results will be announced on December 11.