Patnaik govt to form committee to look into demands. 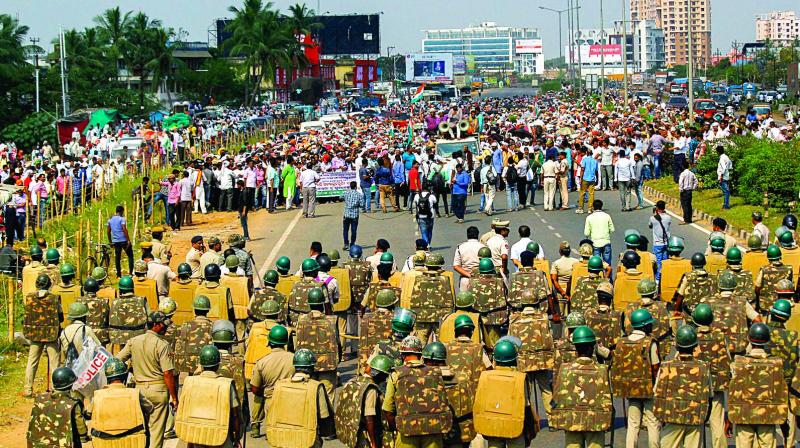 Bhubaneswar: Thousands of farmers under the banner of Naba Niraman Krushak Sangathan on Monday broke police cordons and marched towards Bhubaneswar to press for their demand for price prestige and pension.

The peasants, who have been demanding price, prestige and pensions, defied the imposition of prohibitory orders under Section 144 of the Criminal Procedure Code at Tamando and Hansapal rushed to the city.

The police, however, managed to take control of the situation by arresting top leaders of the organisation and senior Congress leader Pradeep Majhi, who also extended his party’s support to the movement.

Alarmed over the situation and realising that the discontentment of the farmers was creating an anti-government sentiments, the Naveen Patnaik government announced constitution of an inter-ministerial committee to look into their demands.

The committee headed by finance minister Sashi Bhusan Behera will prepare terms of reference to discuss the demands raised by the farmers.

The three-member inter-ministerial panel is also comprised of agriculture and panchayatiraj minister Pradeep Moharathy and cooperative minister Surjya Narayan Patro as the members.

“An inter-ministerial committee under the chairmanship of finance minister has been constituted to consider interests of farmers and look into their demands,” said minister S.B. Behera.