People from all faiths offer cigarettes, bread, jam for getting their wishes fulfilled. 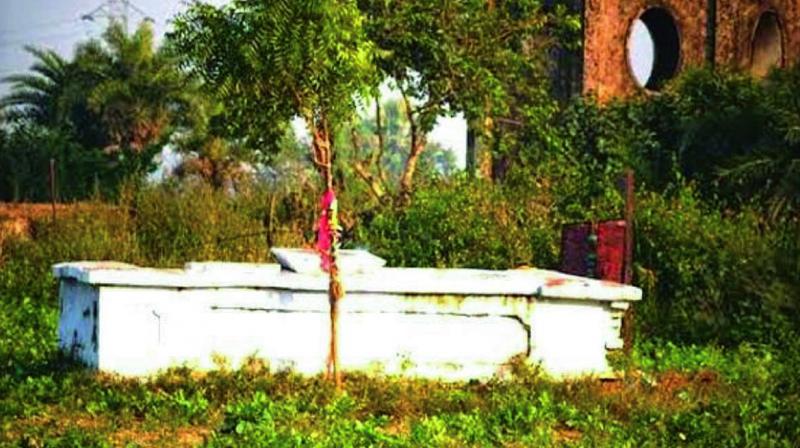 The grave of a British military officer in Moosa Bagh where people offer cigarettes for fulfilment of their wishes.

Lucknow: Making offerings of cigarettes, bread, butter and jam at two particular graves in Lucknow makes people's wishes come true. Have you ever heard of that!

At first glance, they do not seem to be graves at all. Neither do they have a tombstone nor epitaph. And what's more they are not located in a proper graveyard.

One of the two graves, 'Captain ki Mazaar', is located in Moosa Bagh on Lucknow-Hardoi road. Though there is no clear evidence to prove it, but people say it belongs to captain Fredrick Wales, who died in the 1857 Sepoy Mutiny. The second grave, 'Gore ki Mazaar' is located in the Lucknow University opposite the JK block. Actually, it is a flattened platform encircled with grills and a mesh.

Since the captain was reportedly a chain smoker, so in keeping with his liking, people offer lit cigarettes on the Captain ki Mazaar. On any given day, one can see scores of cigarettes there. With the increasing popularity of the captain's 'mazaar', a few months ago it got a face-lift. It was given a new platform, painted in white, all thanks to the captain's ardent believers.

Mohsin, a city resident, says, "If the lit cigarette doesn't extinguish halfway, one can be sure that one's wish will be granted. We have always believed in the captain's 'magic'. People from other districts of Uttar Pradesh come here too."

Interestingly, the second grave is also called 'Captain Baba ki Dargah'. Though the grave belongs to a Christian, it is the Muslims and the Hindus who offer prayers here.

According to Ram Snehi, a retired peon, who has been living on the university premises since 1967, says, "One of the bungalows on the campus has a mound, which has never been fully demolished because it is said to be the 'home' of a British officer. One can still hear the sound of someone walking with boots at midnight every day. Once the 'gora' goes back to his 'mazaar', the sound ends. No harm has come to anybody so far."

People place bread, butter and dollops of jam on the grave at night and nothing is found in the morning. It is believed the 'gora' grants wishes after relishing a sumptuous meal.

Rationalists claim that this is a myth and that stray dogs gorge on the offerings (bread, butter and jam) made by believers on the campus.

"When the campus has a high mesh and grill and the main gate is locked, how can stray or any animal for that matter reach the grave (to gobble up the offerings)? This belief has survived for decades and no one has an explanation," says Mr Snehi.

The 'Gore ki Mazaar' is crowded with loaves of bread, butter and jam, especially when the examination season begins in the Lucknow University. 'Devout' students from various hostels make these offerings to clear the examinations.

People from neighbouring localities too make offerings and all of them swear that their wishes will be fulfilled if the bread is found missing in the morning.

"In the case of a particular university employee, the bread remained untouched. He kept offering the bread every night at the grave, but it remained there until he finally gave up", says an old man.

With municipal elections round the corner, both the mazaars have a steady stream of visitors. Candidates and ticket aspirants have started making rounds to the graves and one hopes that the 'goras' are happy, wherever they are.

PLEASING THE DEAD
1. One of the two graves, 'Captain ki Mazaar', is located in Moosa Bagh on Lucknow-Hardoi road
2. The second grave, 'Gore ki Mazaar' is located in the Lucknow University opposite the JK block
3. If a lit cigarette offered at the grave doesn't extinguish halfway, one can be sure that one's wish will be granted