India   All India  06 Nov 2017  Band, baja but no mare in marriage processions
India, All India

Band, baja but no mare in marriage processions

No traditional Indian wedding is complete without band, baja and barat (marriage procession). 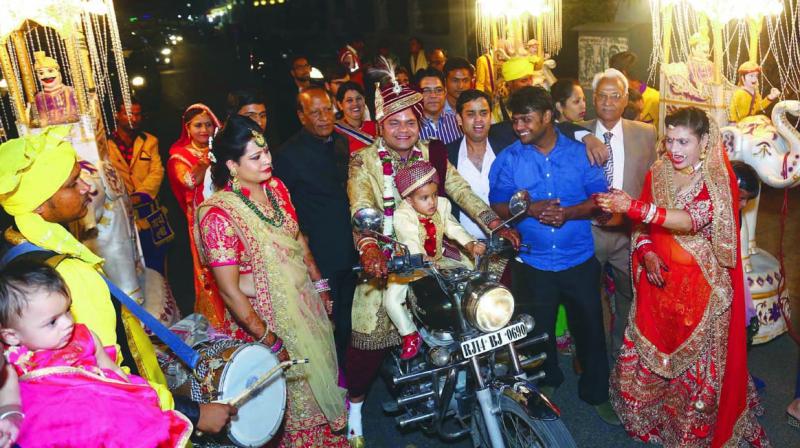 A bridegroom rides a bike in his marriage procession due to a ban on use of mares.

Jaipur: Last year it was notebandi, which ruined the biggest moment in an Indian middle class family as the government sucked cash out of circulation just ahead of wedding season; it was followed by GST that dampened the mood by making it a costly affair but this year it is a health issue that is playing spoilsport.

No traditional Indian wedding is complete without band, baja and barat (marriage procession). But a deadly communicable disease among horses has forced people to skip use of ponies in marriage procession. Traditionally, bridegroom ride on a mare to reach the wedding spot but the government has banned the movement of horses following the spread of contagious disease glanders which can spread to humans.

The disease that mainly affects horses, characterized by swellings below the jaw and mucous discharge from the nostrils, has spread mainly in four districts of Dholpur, Ajmer, Rajsamand and Udaipur and killed 27 animals in the last three months. "It can quickly spread from horses to humans and worrisome part is that there is no effective vaccination yet to fight Glanders," said Dr. Ajay Kumar Gupta, director, animal husbandry department.

Ravi Jindal, president of Rajasthan Tent Dealers Association too has issued an appeal to the people to avoid horses and mares in marriage processions. "A large number of people have switched to cars, bikes, elephants and some even use camels but there are a few still using horses.  Our job was to caution people, the rest is up to them," said an association member".

Amit Sharma was among the cautious bridegrooms. He drove a bike to a hotel in Jaipur where the ceremony for his marriage with Shimona Mehta was organised.

But, for those who make a living out of renting mares and horses for marriage processions these are testing times. "Our business was ruined last year when the government implemented note bandi; this year again we are going to suffer because of this disease," said Karim, a horse supplier.

The ban also affected the Pushkar cattle fair that ended on Saturday. "With a ban on entry of horses, the cattle fair was lacklustre affair," said Devendra Pal Singh, who is engaged in horse breeding.

According to the officials, the latest glanders infection came with mules which were brought to the state from brick kilns at Uttar Pradesh.