Priyanka Gandhi, 10 others arrested as UP boils; video goes viral

Ms Vadra was detained on Monday as she was on her way to Lakhimpur Kheri, where four farmers were allegedly knocked down by vehicles 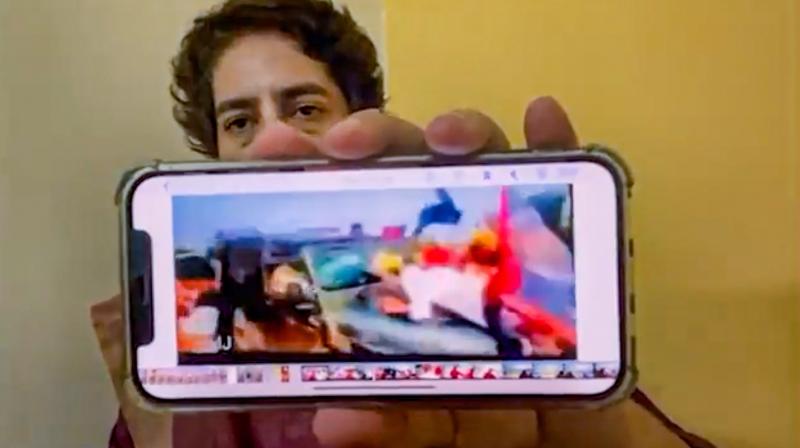 Congress General Secretary Priyanka Gandhi Vadra, who has been detained in Uttar Pradesh's Sitapur while on her way to visit violence-hit Lakhimpur district, speaks to the media virtually. (PTI)

New Delhi: The political temperature soared in poll-bound Uttar Pradesh on Tuesday as the state police arrested AICC general secretary Priyanka Gandhi Vadra and at least 10 others to “prevent the commission of cognisable offences” in Lakhimpur Kheri, where eight people died and several others were injured on Monday in the bloodiest clash since the farmers’ protest over the Centre’s three controversial agricultural reform laws began last year.

After 24 hours of detaining her at a local guesthouse, the Sitapur police formally arrested Ms Vadra and other Congress Party leaders, including Deepender Singh Hooda and Ajay Kumar Lallu, under various sections of the CrPC related to preventive detention due to fears of a breach of the peace. “These are preventive sections. Once we get an assurance that there would not be any violation of peace by them, these sections will be removed,” Sitapur subdivisional magistrate Pyare Lal Maurya said.

Ms Vadra was detained on Monday as she was on her way to Lakhimpur Kheri, where four farmers were allegedly knocked down by vehicles driven by BJP workers travelling to welcome UP deputy chief minister Keshav Prasad Maurya. The angry farmers retaliated by allegedly lynching to death three BJP workers and their driver. Two cars were also set on fire.

Ms Vadra called her confinement illegal, and said that “completely illegal physical force” was used on her and her colleagues at the time of arrest. The Congress leader said that following a verbal statement by arresting officer DCP Piyush Kumar Singh, CO City, Sitapur, that she has been arrested under Section 151 CrPC, she hasn’t received any further communications so far. She went on to say she hasn’t been produced in front of a magistrate or a judicial officer, as required under the law, nor has she been allowed to meet her legal counsel.

Hours ahead of Prime Minister Narendra Modi’s Lucknow visit, Ms Vadra also tweeted a viral video of an SUV running “over farmers at a protest” in Lakhimpur Kheri. She followed it up with a pointed question for the Prime Minister. “@narendramodi Sir, your government has kept me in custody for the last 28 hours without any order and FIR. This person who crushed the annadata (farmers) has not been arrested yet. Why?”

Sharing the viral video, BJP MP Varun Gandhi tweeted: “In Lakhimpur, the video that shows cars running over farmers will shake anyone’s soul. The police should take note of this video and identify the owners of the car, those sitting in the car and the others involved to make immediate arrests.”

No arrests have been made in the Lakhimpur Kheri violence so far, that has now become a national issue with all Opposition parties criticising the ruling BJP over the handling of the case. The Opposition parties have blamed Union minister of state for home Ajay Mishra’s son Ashish for the violence.

The minister, however, said he would resign from his post if there was a single piece of evidence of his son Ashish being at the spot where the violence broke out in Lakhimpur Kheri. “I will resign from ministership if a single proof surfaces of my son being on the spot where the incident happened in Lakhimpur Kheri,” he told a television news channel.

On Ms Vadra’s arrest, Punjab Congress chief Navjot Singh Sidhu warned that the party’s state unit will march towards Lakhimpur Kheri if she was not released by Wednesday and Union minister Ajay Mishra’s son was not arrested for the murder of the farmers. He tweeted: "If by tomorrow the Union minister’s son behind the brutal murder of farmers is not arrested, and our leader @PriyankaGandhi being unlawfully arrested, fighting for farmers, is not released, the Punjab Congress will march towards Lakhimpur Kheri.”

Chhattisgarh CM Bhupesh Baghel was prevented from coming out of Lucknow’s Chaudhary Charan Singh Airport when he arrived to visit the state Congress office and meet Ms Vadra. “I am being stopped from going out of Lucknow airport without any orders,” he wrote in a tweet with a photo of him sitting on the floor at the airport.

Aam Aadmi Party MP Sanjay Singh urged Mr Modi to visit Lakhimpur Kheri and meet the family members of the farmers who were killed in the recent violence. In a letter, the AAP leader also urged the Prime Minister to take along with him the leaders of all political parties. “I would urge you with folded hands that in this great hour of grief and sorrow, you should change your intention of organising any festival and visit Lakhimpur Kheri with the leaders of all the parties to meet the family members of the farmers who were brutally crushed under the car of your minister and murdered for no reason.”

Punjab CM Charanjit Singh Channi, who along with some ministers and party legislators  held a silent protest at Gandhi Smarak Bhawan, said the violence in Lakhimpur Kheri reminded him of the 1919 Jallianwala Bagh massacre. Attacking the BJP government at the Centre, he said it should not force the country’s youth to look at martyrs like Bhagat Singh, Rajguru, Sukhdev and Udham Singh for again restoring democracy in the country.

Calling Ms Vadra’s detention “totally illegal” and “unconstitutional”, senior Congress leader P. Chidambaram said the facts and circumstances concerning her detention “conclusively establish that there is no rule of law in UP”. Rajasthan CM Ashok Gehlot said that democracy was under “threat” in the country. He said the video of the incident shared by Ms Vadra was sufficient to substantiate the allegation and no other evidence was needed. “The popularity graph of Prime Minister Narendra Modi is coming down and people have understood that there is a difference in his words and actions,” the Rajasthan CM said.

Demanding Ms Vadra’s immediate release, PDP president Mehbooba Mufti tweeted: “GOI first gets a docile media to berate Congress & lament lack of a viable Opposition but systematically ensures they don’t discharge their duties by illegal arrests. We are a democracy on paper but clearly the grim descent into a banana republic has begun. Release @priyankagandhi.”