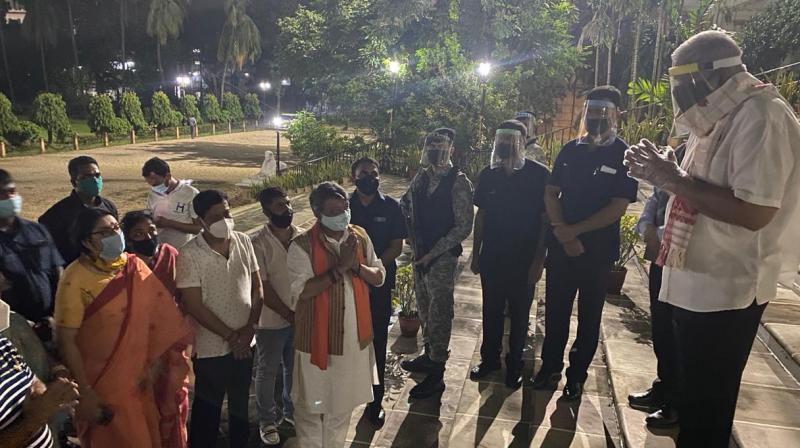 BJP leaders meet the governor at the Raj Bhavan. (Twitter)

Kolkata: A day after Barrackpore BJP MP Arjun Singh's close aide and councillor Manish Shukla was killed by unknown assailants in Titagarh, the West Bengal CID on Monday arrested two persons in connection with the case.

The two were picked up from their residences in the district, a senior police officer said. "We have arrested two persons in connection with the case. There are more people involved in the killing. The probe is on," the CID official said.

Meanwhile, high drama unfolded on Monday evening after Shukla's body underwent post-mortem at Nil Ratan Sircar Medical College and Hospital (NRSMCH) in Kolkata. The post-mortem report revealed 14 bullet injuries on the body showing how mercilessly the councillor was killed in absence of his security personnel who were apparently on leave on Sunday.

Infuriated, the BJP leadership headed for Raj Bhavan with the body in a convoy of cars from NRSMCH. They were however stopped by a large contingent of police personnel who put up barricades near New Market area of the city to block the rally of the cars with the body. Failing to move ahead, the BJP leaders had a heated altercation with the cops. Later, it was decided that only a BJP delegation would be allowed to go to Raj Bhavan. Accompanied by senior party leaders, Shukla's father Chandra Mani met the Governor at Raj Bhavan. The body was taken to Titagarh at night for last rites.

Singh's close aide and councillor Shukla was shot dead late on Sunday evening. At around 9 pm on Sunday, a gang of four miscreants on two motorcycles came and fired at him in Purani Bazar area of Titagarh where he was talking to some BJP workers outside the party office. With bullet injuries, he was rushed to BN Bose Hospital which referred him to a private hospital in Kolkata only to be declared brought dead there.

Shukla's murder took place hours after Singh threatened the Mamata Banerjee government of a "guerrilla" style rally by the BJP which will "shake" its state secretariat, Nabanna. Accusing the ruling Trinamul Congress of the murder, the BJP had called for a 12-hour Barrackpore bandh in protest on Monday.

An agitation backed by the BJP strongman, however, turned violent as protesters allegedly hurled bombs and pelted stones while clashing with the police. The police also lobbed teargas shells to disperse the protesters. Shukla, a resident of Khardah, was a strongman of Titagarh with multiple criminal cases against him.

Switching to the TMC from the CPI(M), he earlier contested the Municipal Election in 2015 as an Independent candidate and became a councillor of the Titagarh Municipality. Last year, Shukla, following Singh's footsteps, joined the BJP.

Singh said, "He was like my brother who used to protect me always. Barrackpore and Bengal will not forget his sacrifice. He was killed when he returned to the party office. The TMC and police will have to suffer for their misdeeds." Many senior BJP leaders, including Kailash Vijayvargiya and Mukul Roy visited Shukla's family and slammed the TMC and police.

Taking over the probe in the BJP leader's murder, the CID initiated an FIR against seven persons on murder charge and also arrested one accused: Mohammad Khurram from Titagarh. Khurram was earlier detained by the police alongwith with other suspects. Preliminary investigation revealed that Shukla reportedly had links with the murder of an aide of Khurram recently.

Claiming of contract killing, Vijayvargiya demanded a Central Bureau of Investigation probe to look into the role of Barrackpore Police Commissioner Manoj Verma and joint commissioner Ajay Kumar Thakur in the murder.

The West Bengal police however stated, "A person was shot dead last evening in Titagarh area of Barrackpore. Police is investigating the crime and looking into all possible reasons, including personal enmity because the victim was accused in some cases of murder and attempt of murder. Please do not jump on conclusion without proper investigation. Irresponsible comments on social media are tantamount to interference in the investigation. Please refrain from this."

The governor tweeted, "Conveyed my concern of the present alarming scenario @MamataOfficial to the new Chief Secretary. Am sure Chief Minister would be indicated all these critical aspects that run down democratic governance and  lawlessness. Political violence and targeted killings must stop."