The murder occurred in Bihar’s Purnea district on Sunday. 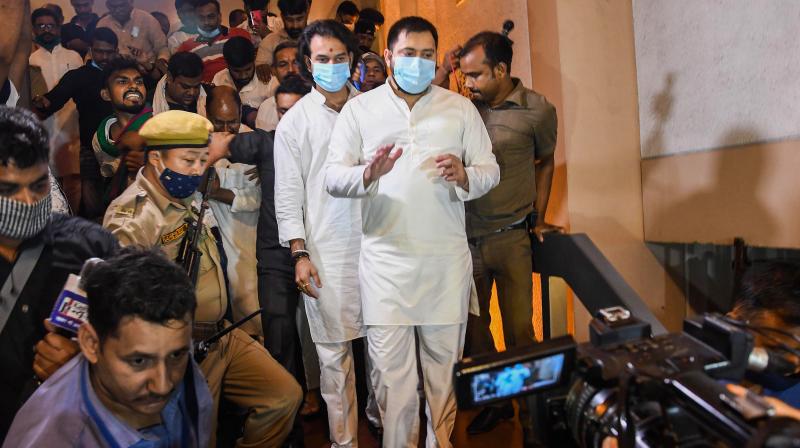 PATNA: RJD leader Tejashwi Yadav, his elder brother Tej Pratap along with four others were booked on Monday for the murder of former RJD leader Shakti Malik.

The incident occurred in Bihar’s Purnea district on Sunday. The police investigating the case said that Shakti Malik was at his residence when he was gunned down by three armed men.

Others who have been named in the FIR are Anil Sadhu, Kalo Paswan, his wife Sunita Devi, and Manoj Paswan.  Anil Sadhu is son-in-law of Union minister Ram Vilas Paswan. He was earlier with the LJP.

The deceased's wife, Khushboo Devi, in her complaint to the police also pointed at a serious political conspiracy behind the murder of her husband.

Sources said that Shakti Malik was trying for a ticket from Raniganj seat in neighbouring Araria district. Soon after his murder on Sunday, a video clip surfaced in which the deceased was seen making allegations against Tejashwi Yadav and Anil Sadhu for demanding Rs 50 Lakhs for a ticket to contest on RJD ticket.

“A case has been registered and the investigation is underway,” Purnea SP Vishal Sharma said.

Sources from Purnea told this newspaper that the police were also analyzing Shakti Malik’s phone records, his source of income and bank details. They said that during the initial probe police found that he was expelled from the RJD in September after he levelled serious allegations against top RJD leaders.

The probe also revealed that he had political enmity with a local leader Kalo Paswan who was also interested in contesting from Raniganj seat on RJD ticket.

Meanwhile, the incident has raised the political temperature in Bihar ahead of Assembly elections. The NDA leaders while demanding an explanation from Tejashwi Yadav and Tej Pratap said, “CBI probe should be ordered to find out the truth behind the incident”.

However, the RJD called the allegations and FIR an attempt to tarnish the image of Tejashwi Yadav in view of the Assembly elections.

“All this is being done in view of the Assembly elections. The allegation against Tejashwi Yadav and Tej Pratap is political motivated and baseless,” RJD spokesperson Mrityunjay Tiwary said.