We have the ability to deal with two-fromt war along the northern and western borders, says IAF Air Chief Marshal RKS Bhadauria 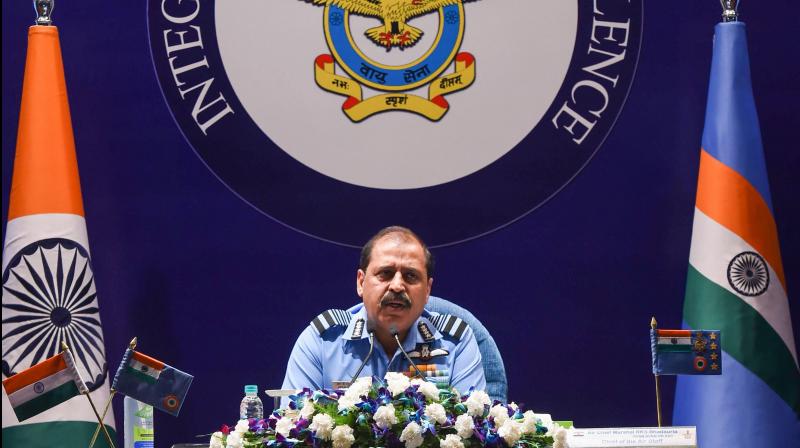 Indian Air Force chief Air Chief Marshal RKS Bhadauria said on Monday there is no question that in any conflict scenario China can get the better of "us” and asserted that Indian Air Force is prepared to even deal with a two-front war along the northern and western borders.

He said that integration of Rafales along with upgraded operational capabilities of current fighter jets “gives us the ability to shoot first and strike deep and hard, even in contested airspace.”

“If you are asking me whether we came close to striking? No. Were we prepared? Yes,” he said on India-China stand-off during his annual Air Force Day press conference.

However, he added that there is no question of underestimating the adversary which has invested heavily in its defence in the last few years.

“Let me share with you with confidence that operationally we are amongst the best,” said Air Force chief.

He said that Indian Air Force immediate offensive deployment of combat ready units in response to the stand-off along the LAC is indicative of “our operational state  today.” “Our airlift capability was also brought into focus as we supported the Indian Army in rapid mobilisation of troops and equipment to operational areas at a pace which our adversary didn’t expect,” he said.

Air Chief Marshal Bhadauria said that the Air Force has operationalised the recently acquired Rafale, Chinook, and  Apache aircraft and integrated them into its current concept of operations in  record time.

Asked about the scenario over the next three months in eastern Ladakh, the Air Chief said it depends on how the talks progress. "We hope that the talks will progress along the lines that are expected. Current progress is slow, what we see is an increase in the effort to dig-in for winter, in terms of forces on the ground, in terms of deployment of air assets in airfields close by. Defence forces see the ground reality. Our further action will depend on ground realities," he added.

He said that  IAF is transforming at a rapid pace and over the
years it  has grown  from being a
tactical force to a strategic one with trans-oceanic reach.

“In the next three years we will see the Rafale and LCA MK1  squadrons operating with full strength, along with additional Su-30 and Mig 29  aircraft, that are being ordered in addition to the current fleets. The mid-life operational upgrade of Mirage-2000, MiG-29 and Jaguar fleet would add to our  capability in this period, thereby further enhancing not only their operational  capability but overall operational potential,” said Air chief. He said that Air Force also plans to digitise its older Air Defence  systems and seamlessly integrate them along with the latest acquisitions.